Newspaper article asking if it is disloyal to protest against lynching, segregation, etc. and asking President Wilson to "do some great deed."

Are Negroes the only ones who must close their mouths on the threat of being called disloyal.

While lynchings are going on shall we not protest? Tuskegee Institute has just sent out a statement that during the past six months lynching has increased. Is it disloyal to call attention to and protest against lynching? Or shall we give the country over to lynchers and other criminals. Is not Hoover after the food gougers? Is a food gouger any worse than a lyncher. If we laud Hoover for getting after the food profiteers why not laud the Negro press which gets after the lyncher.

Is not the right to vote one of the fundamental principles of Democracy? Are not the women doing all they can to get this right? Who has called them disloyal? If then the Negro is denied his constitutional right to vote, shall he not ask for it, and ask now? What wrong is done by asking now?

And take segregation. Is it not true that notwithstanding the fact that the Supreme Court has handed a decision against segregation that at this very moment, Baltimore is trying to re-enact segregation? Shall we sit idly by and permit it?

We do not claim that we have real democracy here. But we do claim that we should give every privilege and right we can to have a larger share of democracy.

And what better time is there to ask for our rights than NOW? First: to give them NOW will not at all impede the progress of the war. If stopping lynching; permitting the Negro to vote, doing away with Jim Crowism, etc., will retard the war, and make our chances of victory less, then we might say do not ask for them now. But instead of making our chances of victory less they will make victory surer, in that they will give greater fighting power to millions of Negroes.

Second: to give Negroes more democracy NOW would be one of the best illustrations of the sincerity of our government. We do not say the government is insincere, but we do say that to give the Negroe's larger democracy would be one of the greatest illustrations of the broad-minded democracy our country has ever seen. And we believe so much in our great country that we believe that if the Negroes will prove loyal as they are doing and at the same time, like the white women, ask for what they know is right, the country will answer in this war just as the country answered in the 60's with a great example of justice for Negroes, and as Lincoln issued the Emancipation Proclamation, so our own President Wilson may do some great deed for the Negro. And as Lincoln did not wait till the war was over so let us hope that President Wilson will not wait if we continue to lay the justice of our cause before him—and our cause is just. 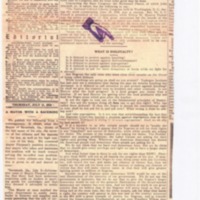