Regarding Senator Bankhead's bill creating an African American division of the Agriculture Department.

Mr. Johnson, one of the colored men who called here a week or two ago in favor of having work for negroes concentrated in a new division of this Department to be headed by a negro, now telephones me that Senator Bankhead has introduced a bill which seems to cover the matter, which he and his friends had in mind, but he says he knew nothing of this bill. He thinks it has some church backing.

I would like to see a copy of Senator Bankhead's bill if you can get it for me.

Copy of this memorandum goes to Dr. True and Mr. Knapp.

R. A. Pearson
Assistant to the Secretary. 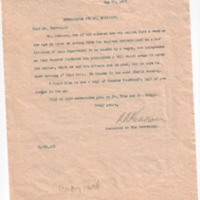