General Pershing reports on the strength of the allies.

For the Chief of Staff and Sec’t of War.
The following figures, not regarded as either complete or entirely accurate, but based on the best available information, express the man power situation of Great Britain, France and Germany.

Great Britain: Combatant strength in France, about July 1st, 1918, 58 complete divisions, 1 million 44 thousand. Supposed “home army” of which 80,000 are probably in Ireland and the remainder in use as line of communication troops, etc., in England-336 thousand. Line of communication troops, etc., in France-536,000, Expectation from the man power bill, which was originally 500,000, now taken to be only 50,000 miners and 30,000 farmers, 80,000. Remainder supposedly in depots after the deduction of all replacements known to have been made to July 1, 1918, -484,000. Wounded estimated as returnable to firing line in 1918-113,000. Total resources for 1918 (total of above figures)-2,593,000. Of this total, 872,000 are thought not available for combat leaving 1,721,000 available for combat and for replacement on the western front. There are also 3 British divisions in Italy, 3 in Macedonia, 2 in Palestine, one in Mesopotamia and one in Egypt. Ten of the divisions now in France are from the dominions of Great Britain.

Referring to additional prospective reenforcements in the last paragraph, the British claimed that in precluding 130,000 replacements for June they have raked up everything available and will not be able to cover any more losses until October. The French claimed on June 18th that the units at the front were short 80,000 men and that they had only 60,000 men in depots with which to replace. Further that there are no more available replacements until the class of 1919, 200,000 men, become ready for service on September 1st. Our figures, however, show that the British should have a residue of 484,000 in depots and the French a similar residue of 366,000. These facts appear in the data given in the preceding paragraph and are deduced from a statement made to the Versailles Council about February 1st, 1918. Neither the British nor the French, so far as is know [sic], have made use of this surplus man power, apparently available for combatant service.

The figures and statements given in the preceding paragraphs of this cable must be considered as extremely confidential and under no circumstances should they be published. The main reason for this is that there is going on between French and British Governments at present an acrimonious dispute as to whether Great Britain in [sic] throwing her full weight against the Germans in France. The French claim to believe that the British are holding an organized force of about a million men, nearly all fit for service in France, in England and Ireland as a home army.

Copy for Chief of Staff. 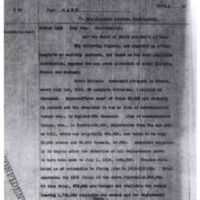