Paragraph 1. In response to my telegraphic request for complete set of memoranda prepared by British Ministry of Munitions regarding curtailment or discontinuance of munition manufacture. W. T. Layton of British Ministry of Munitions has sent me 3 documents, one of which is marked “Confidential”, and bears legend “This document is property of his Britannic Majesty’s Government”, and is marked in pencil “draft”. In connection therewith Layton makes following remark: “Not yet approved. Gives our views regarding Inter-Allied organization in period immediately following cessation of hostilities.” The documents proposes organization of economic association of nations during reconstruction period, utilizing existing machinery of Allied Maritime Transport Council and Associated Program Committee for the purpose of controlling distribution of foodstuffs, certain raw materials, such as wool, etc, and possibly cotton, and of allocating ocean tonnage, etc. Document contains following statements: “First, then, as regards finance, we must face a serious question of policy. If the debt position of the various Allies remains at the end of the War what it is today; if Belgium and France and Italy - not to mention such bad debtors as Russia and Serbia - remain under the burden of an immense War debt to [copy cut off] and the United States; if Great Britain herself is to continue to owe the United States a debt largely arising out of French and Italian debts to Great Britain, it will be very difficult for the debtor countries to devote their energies to the task of internal reconstruction, or for the creditor countries to renounce responsibilities for the difficulties experienced by their debtors in coping with this task. Moreover, in general, an early return to normal trade relations will be prejudiced, and may be indefinitely postponed by the financial measures necessitated by this burden of debt. The first condition, therefore, of any sound economic organization after the termination of hostilities seems to be an early arrangement by which Great Britain and the United States should cancel the debts owed to them by France and Italy, and by which the United States should also cancel at least a large part of the British debt in the United States. The proposals in the next section are based on the assumption that such an arrangement can be made. If not, then the continuance of these enormous debts must be a continuance of a large measure of financial assistance by the United States government to Great Britain. This will undoubtedly tend to perpetuate the functions of the whole Inter-allied organization, since, to go no further, the increasingly unfavorable financial position of Great Britain will necessitate a careful control over British trade which must react strongly upon the whole of the rest of the world, largely dependent as it is --------- resources of the British Empire.” Notwithstanding document has not been approved I have thought it desirable transmit foregoing for your information. I have handed document to Colonel House and will forward photostat copies to you by courier. 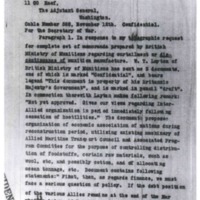