Request that American Red Cross active in France become part of the military.

MEMORANDUM For the Secretary of War

Subject: Detail of Officers and Enlisted Men to the American Red Cross.

Because many of the Red Cross workers are within the draft age and are naturally averse to continuing in a non-military status, the management of the American Red Cross proposes, because it deems it necessary to the maintenance of its work in France and to the preservation of the integrity of the organization there, that some eight hundred of its officers be commissioned, and some twenty thousand of its workers be inducted, into the Army of the United States, and thereafter be immediately detailed to the Red Cross to permit them to continue the work which they are now performing. May such a proposal be legally adopted and executed?

The American Red Cross is a civilian organization. It may render voluntary aid to the land and naval forces, and the President is authorized to accept the same. (37 Stat. 90). It is not a part of the Army or of the Navy. Its members are not entitled to the benefits of the War Risk Insurance Act (40 Stat. 398, or of the Soldiers’ and Sailors’ Civil Relief Act (Public 103 - 65 Congress). Consequently, service in the Red Cross is not military service. (Ops. JAG 34 - 442.1).

Since service with the Red Cross is not military service, officers or enlisted men may not legally be detailed thereto, at least, in the absence of special legislative authority therefor. Certainly, there is no authority for induction of men under the Selective Draft Act for non-military purposes. The constitutionality of that Act has been sustained under the grant of power to raise and support armies. (Selective Draft Law Cases, 245 U. S. 366). To assign an officer or enlisted man to a duty which would entirely and for a considerable time separate him from the military duty for which Congress has authorized his employment or induction and his pay would be illegal. (Ops. JAG 210.6, August 16, 1918). The proposed detail is impliedly prohibited by section 10 of the National Defense Act (39 Stat. 166, 171), which provides as follows:

“Hereafter the President shall be authorized to detail not to exceed five officers of the Medical Department of the Army for duty with the military relief division of the American Red Cross.”

The provision of the Selective Draft Act (40 Stat. 76, 82) suspending the restrictions upon the detail of officers and enlisted men of the Regular Army has reference to and suspends the statutory restrictions upon details to particular classes of military duty; it does not enlarge the grant of authority in the above-quoted sentence nor is it a general grant of authority to employ soldiers in civil work or employment.

3. The question is answered in the negative. 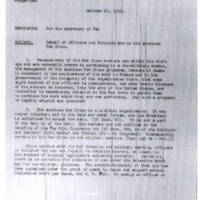