Campaign of Terrorism in Russia

Campaign of Terrorism in Russia

I am in receipt of information from reliable sources revealing that the peaceable Russian citizens of Moscow, Petrograd and other cities are suffering from an openly avowed campaign of mass terrorism and are subject to wholesale executions. Thousands of persons have been shot without even a form of trial; ill administered prisons are filled beyond capacity and every night scores of Russian citizens are recklessly put to death; and irresponsible bands are venting their brutal passions in the daily massacre of untold innocents.

It is the earnest desire of the people of the United States to befriend the Russian people and lend them all possible assistance in their struggle to reconstruct their nation upon principles of democracy and self-government. Civilization recoils at the crimes which are being committed against the innocent and helpless victims of wanton barbarism, and I know that my fellow citizens would wish me on their behalf to express publicly their horror at this existing state of terrorism, and their deep compassion for the Russian people. 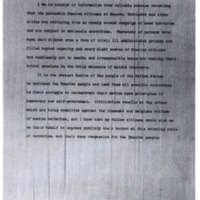