I received your letter Saturday and was sure surprised and grieved to learn of John's death. We were quite good friends and were together most of the time while in France. I will give you an outline of our time while over there.

We landed in France the 17th of May; went from there up to the Northern part; stayed there for about a week; then came back to a place close to Etaples. There we stayed for a few weeks and drilled with the British.

We were put in the same squad. At that time I was the gunner and he was the number 2 man for the gun or loader as it is called. We were considered one of the best gun teams of the company. From there we left for a small place down by Paris by the name of Changis. (It is on the Marne River.) There we had some good times and of course some blue times but we were almost always together. We stayed tere until the night of the 17th of July when we started for the front. (All the traveling we had done up until now was on the train.)

We were to be a motorized outfit so from the 17th on we went in trucks as we got ours a day or two before. We got to our destination along about daylight and of course, we all dug in the bank of the road as the shells are not so apt to hit you if you are below ground. We didn't ave much to do for a few days as we were an outfit that didn't go in action unless absolutely necessary. But in a few days we went on up a little farther and that was the first barrage we were ever in. We lost several men out of our company but John and I came out all right.

Along about the 1st of August the Corporal of our squad got wounded. Then I was made Corporal and John was gunner. About the 12th of August we were relieved and went back for a rest. We went down to a small place called St. Blin close to St. Dezier. We stayed there until sometime before the St. Mehiel drive when we moved up there in reserve. We didn't have to go into real action there as the drive didn't take as many men as they thought it would. We watched several airplane battles while there in reserve.

We stayed there until about the 22nd of September then went back several miles as we thought we were going back for a few weeks rest. Although we hadn't had any real action, we had been under shell fire almost all the time for about three weeks. Of course, it was just shells from a long range gun that came over us.

Then on the 25th of September we got word we were to go up to the Verdun sector. We traveled most of the night (in our vehicles as we had the Ford trucks then) and in the morning before daylight, we were to the trenches. Just about daylight we put over a barrage of machine gun bullets besides the artillery barrage. We advanced almost all that day and I never saw but 2 or 3 wounded men but there were a lot of prisoners taken by our men.

From then on we had a pretty hard time until the 4th of October as were under shell fire that was pretty heavy. We were having all sorts of rumors of getting relieved but on the 3rd we got word we had to put over another barrage. We were up all night getting to our position. Then we set our gun and of course dug in for protection. When the barrage was over we stayed by the gun as it was as good a place as there was. It is pretty hard to keep track of the time in a place like that. I know it was quite a while after daylight that we were lying by our gun - I on one side and John on the other - when he raised up and said he was hit. He turned over and we saw he was hit by a piece of shell fragment but we couldn't see it. We bandaged him up as well as we could with his first aid package. Then he was taken to the first aid station by four men of my squad. The squad was broken up and put in others after the gunner was wounded. Well, we got orders about noon to make an advance and while going forward I was wounded slightly in the left hand. I went back to the first aid of the 47th Infrantry and was attended to. I was there for about a half hour when they told me an ambulance was read and that I could go in to the field hospital. I got in and was sitting there talking to some other fellows when a fellow that was on a stretcher spoke up and asked if that wasn't Rohlfing. Then I recognized the voice as John's. He told me he had been taken to our Battalion First Aid, then was taken to this ambulance. He said they tried to find the piece that had hit him but as they didn't have the instruments they couldn't find it. We rode in the same ambulance until we got to the Field Hospital. He didn't seem to be in very much pain - only when the car would hit a bad place in the road. Then he would have some pain.

When we got to the Field Hospital all of us walking patients were taken out and went to the other hospitals in a large supply truck. They put other lying patients in the ambulance with John and from there I never knew to what hospital he went. You can rest assured that he had as good treatment as could be given under the circumstances because I know they had good treatment in the hospital I was in.

You can always be proud of your boy because I had been with him for some time and he always took things as they came and when he was called on to do anything, he was ready. I have been in some pretty dangerous places with him and he never acted as if he was afraid as of course some are. He was always ready to undertake the job. While in those kind of places, we were always together.

Now there are a lot of things that could be told if I was asked. Of course, I can't tell everything on paper as I could if talking, but this is a fairly good outline of our life over there. I would like awful well to come and visit you but at the present time it is impossible as I have been trying to make arrngements for this vocational training that the government is giving the disabled soldiers. I was pronounced 15% disabled when I was discharged so at present you see how I am placed. If any of you folks should come, you would surely be welcome by all here at home.

I have just read this letter over and I have let one of the most important things out and that is to tell how John was wounded. He was wounded in the stomach just about the waist line and right in front. I never thought it was serious at the time, but of course, in a place like that you can never tell.

Now I think this is about all I can think of at this time so will close. If anyone comes down here they will be welcome. If you write and ask any questions, I will be glad to answer them or if I can come up there later and you want me to I will do that. I will close with my best wishes to you all and very best regards. 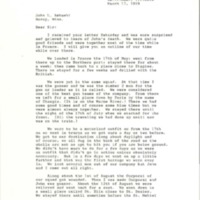