The War Department desires to ascertain the wishes of the families of officers, enlisted men, and civilian employees regarding the permanent disposition of the bodies of those who have died overseas.

The original plan of the Department was to deliver the body in every case at the home address of the deceased to the person legally entitled to dispose of the remains. A desire has been expressed, however, in numerous instances to have the body remain abroad, and General Pershing is likely soon to enter into negotiations with the French and Allied Goverments with the view of establishing permanent cemeteries for members of the American Expeditionary Forces. Marshal Petain in a most courteous letter has informed General Pershing that "France would be happy and proud to retain the bodies of the American victims who have fallen upon her soil."

A bill is now before Congress for the establishment of "Fields of Honor" abroad, which will insure future care by the United States Government as national cemeteries are now cared for. Burials have been made heretofore in cemeteries of the Allied nations or at or near the battle field in land set apart for this purpose as a cemetery, and religious services in accordance with the rites of the Protestant, Catholic, or Hebrew faith have been held at the grave.

In case the remains of a deceased soldier are returned to the United States they will be interred either at the former home of the deceased or at a national cemetery, according to the wishes of the one authorized to direct the disposition of the remains, and all expenses, including transportation, casket, shipping case, flag, and the preparation of the remains for shipment, will be paid by the United States. Hire of a hearse and other burial expenses incurred at the home of the deceased may be paid, on application by the relatives, by the Bureau of War Risk Insurance, Treasury Department.

In order that the proper disposition of the remains may be made, and that such disposition be directed by the person entitled to do so, the War Department will recognize the right to direct the disposition of remains in the following order:

It is desired that the information indicated on the inclosed card be furnished concerning the person named thereon at the earliest practicable date. If the card is received by some one not authorized to direct the disposition to be made of the remains, please deliver this circular and the card to the person who is entitled to do so.

The Department is unable to state when it will be possible to begin the removal of the remains of the soldiers, but the information requested is being collected at this time in order that there may be no delay when the time comes for such removal.

In returning the card please use the inclosed addressed penalty envelope, which requires no postage. 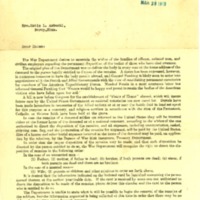