A review by Alexander Woollcott, of Frederick Palmer’s “Newton D. Baker: America at War,” privately reprinted for the reviewer from the American Legion Monthly.

IS yours a mind which, like my own, can be unduly plagued by the circumstance that one picture on the wall hangs slightly askew? Does such a dislocation make you fret and fidget until at last, while matters of immediate personal moment wait, you drag over a chair, climb up on it, and straighten the darned thing with your own hands? If so, you know the quality of the sense of relief that gradually took possession of me as I read this new book which Frederick Palmer has written about a chapter in the life of an erstwhile mayor of Cleveland. I mean the Cleveland lawyer whom chance and Woodrow Wilson called to the post of Secretary of War just in time to direct the affairs of that office during the period of considerable activity which was its lot in Mr. Wilson’s second administration.

I say “new” book advisedly, for although you may have read the selections from it which were first published serially in this very magazine, something like two-thirds of the entire work did not become available until two fat volumes appeared on the bookstalls in November. From their pages you may learn, if you wish to, with what incomparable ability Newton Baker performed the task which Wilson set before him in America’s emergency, and you may realize (for the first time, perhaps) how well this quiet man has deserved of the republic.

And I say “for the first time” just as advisedly. Because, although we all know that through two subsequent administrations the opposition spent a king’s ransom vainly dredging the War Department records in the hope of finding some small trace of malfeasance, even so interested and intelligent a student of the war as Mr. Palmer himself did not know, until he gained access to the documents, how uncommonly well Mr. Baker had deserved of the republic. Indeed, there is an extra chuckle in the book for those enough in the know to realize that Palmer was, if anything, an anti-Baker man who was swept off his feet by the sheer force of the facts unearthed in his own researches, and was by those facts turned into a profound admirer. As it worked out, the chief strain of the task the publishers assigned him proved to be the strain of suppressing his growing impulse to toss his hat into the air and cheer in the properly suspect manner of a campaign committee.

If this was true of an observer so advantageously placed as Palmer was throughout the war, how much more must it be true of laymen too easily impressed in 1917 and 1918 by the hostile critics who, as if by common consent, hit upon the silent, busy Secretary of War as the scapegoat upon whom they might vent their sundry wartime disgruntlements? Chief among these critics were the late Colonel Roosevelt, an Achilles sulking in his tent, and George Harvey (an editor), who having had his feelings hurt by the sometimes glacial Wilson, found a singular relief in calling Mr. Baker Newty Cootie, and announcing, from time to time, that the War Department had ceased to function.

Now, at Mr. Palmer’s heels, you can go back over that confusing time, checking up the diatribes with the facts, and thereby learning how often Mr. Baker was thinking and working a mile and a year ahead of his noisiest critics, how often he was blamed for the sins of Congress, and how often a Harvey polemic denounced Newty Cootie for failing to do something which, as a matter of record, Newty Cootie had already quietly attended to. Yet it has been apparent, from time to time (as when even the Britannica came out with an infected account of Baker), that enough of the old animosity lingered vaguely in the public mind to make such a corrective as the Palmer book desirable in the minds of all who can be irritated by a picture left askew on the wall.

If the straightening process was still needed at so late a date, it is partly due to certain habits of Mr. Baker’s own singularly serene and gracious mind. While in the Cabinet he was, by all the instincts of his nature, indisposed to answer back. Indeed, he never did so except when it seemed valuable for the morale of the faithful band toiling day and night under him that he should dispel any anxious public illusion that they were sluggishly failing the Army in its hour of trial. But, as the civilian head of a force in which buck-passing was the favorite sport, it was his usual custom to take all the bucks handed to him and slip them into his pocket without looking up from his work. Into that capacious pocket, for instance, went the small matter—yes, the relatively small matter—of Leonard Wood. Now we all know that if that thwarted chieftain was kept at home while the fight was on, it was because Pershing simply would not have him around the premises. But at the time, it seemed best for the service that Pershing should be spared the reputation of having made so unpopular a gesture. Wherefore, when people snarled at Mr. Baker for “persecuting” General Wood, Baker said nothing and went on with his work.

This habit became so ingrained that, even when the Armistice was signed, and the war of the memoirs began, Mr. Baker could not be induced to speak up in his own behalf. He, at least, has written no book. There are times when this exasperates me, for, compared with most historical documents, a mere office memorandum of Baker’s has such shining lucidity that reading it is a refreshment in the sense that breathing mountain air is a refreshment. Then I have a lively curiosity to know what a man at once as informed and as wise as Newton Baker really thinks of Foch’s work, and of Pershing’s. And whether, since it was his assignment to see that our part in the World War was well done, he thinks now that this country or the world is any better off because it was well done. Or any better off because we went into the war at all. Or any worse off. But Baker has remained silent, and though I sometimes regret that silence, I think I understand its spirit, and to that Baker spirit my hat is off. Knowing, as he knew, that the great multitude who had had the bloody and painful part of the job to do would pass nameless and undistinguished into history, and seeing, as he must have seen, how many of the minor chieftains were busy window-dressing their own silly little reputations, he could not find it in his heart to care much what anyone, then or later, should say about himself. Suppose they misjudged him. What of it?In the front of the second volume, Mr. Palmer quotes a paragraph from a letter Baker wrote some time after the war to a neighbor who was trying to get him indignant about the subsequently abated inaccuracies in the Britannica. Here it is:

I am not so concerned as I should be, I fear, about the verdict of history. For the same reason it seems to me unworthy to worry about myself, when so many thousands participated in the World War unselfishly and heroically who will find no place at all in the records which we make up and call history.

That paragraph is, to my notion, a bit of evergreen which will lie fresh and sweet on the tomb of the Unknown Soldier in Arlington long after all the formal wreaths laid there by all the silk-hatted statesmen of our time have withered to dust.

I do think I should add that this disposition to let his work speak for itself, this absence of concern about the verdict of history, amounts with Mr. Baker almost to a lack of what used to be called a decent respect for the opinion of mankind. Or, if not quite to that, at least it reveals him as lacking that streak of shoddy, that lingering childishness, that touch of the prima donna—call it what you will, but it is the alloy that makes gold into currency—which in so many great men has made them relish the approving roar of their contemporaries and so love the hot breath of the crowd on their necks that they were perhaps all the better equipped for leadership in a democracy. Certainly it is a lack which makes Mr. Baker the despair of all the men who have been vainly trying to persuade him to let his name be put up at the next Democratic convention.

When you are going to catch a train, it is just as well for you to know how slow your watch is. When you are reading a book-review, it is sometimes helpful for you to know something of the reviewer’s bent and bias. In that sense, I think I should report that this review is written by one who would, if he got a chance, cast his vote for Newton Baker for President of these United States with greater satisfaction than the Constitutional provision for universal suffrage ever before afforded him. Wherefore, in reading Mr. Palmer’s deliberately restrained narrative, I first found myself almost lame from wishing he would come right out and say, in so many words, that here was the ablest cabinet member to serve this country since Alexander Hamilton. But when I reached the final page, I was glad he had not set up a possible resistance by any such roll of drums. With far more effectiveness than my own impatient zeal would have allowed me to achieve, Mr. Palmer let the facts say it for him.

They say it for him in a book which has extraordinary cumulative force, a book written from so rare an eminence that it gives the whole sweep of our war effort from the lumber camps of Oregon to the dripping shambles of the Argonne, a book further marked, to my notion, by its good temper and its sagacious moderation. As I put it down I am tempted to say of Frederick Palmer (as Booth Tarkington said of that literate marine, Captain John W. Thomason, Jr.) here is a gentleman who knows how to hold his hand. 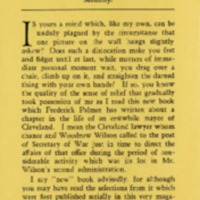