A newspaper article on Woodrow Wilson's meeting with Senators Hitchcock and Fall on 5 December 1919.

“Responsibility on Other Shoulders,”

President Says in Three-Quarters of an Hour Interview, in Which He Dispels Rumors Concerning His Condition and Displays a Keen Sense of Humor. Mystery Surrounding Sick Room Ended — Teamwork With Congress on Mexico Assured.

President Wilson spent three-quarters of an hour yesterday with Senators Hitchcock and Fall discussing the Mexican situation and the result of the interview has been to greatly enhance the chances of teamwork between the administration and the Senate in pursuance of a new red-blooded American policy in dealing with Carranza. Incidentally, the interview has cleared up many doubts concerning the President’s ability to handle affairs of state, his alertness of mind and his physical condition.

The interview was satisfactory to all concerned and Senator Fall, with his usual frankness and directness, said he was entirely satisfied. A dramatic incident of the conference was a telephone message from the State Department, delivered by Admiral Grayson, announcing that William O. Jenkins, the American consular agent who has been imprisoned at Puebla, had been released.

After the President had devoted his undivided attention to the Mexican crisis, Senator Hitchcock, just before leaving, said:

“How about the peace treaty, Mr. President?”

“That responsibility has been shifted to other shoulders,” the President replied. “Let it rest there a while.”

Aside from the interest in the Mexican situation, there has admittedly been the most general and widespread interest, not only in America but throughout the world, as to the President’s real condition.

Consequently the statements which Senator Fall made after the interview had unusual interest, particularly because that senator has a reputation for calling a spade a spade and does not know the meaning of the word evasion.

His worst enemy cannot acuse him of deception or failure to bluntly tell facts, to the best of his ability. He has been a pronounced political enemy of the President, and, like many others, has heard reports that the President’s mental acuteness or ability to handle the nation’s affairs had become affected through illness. He stated unreservedly after the interview that he found the President mentally alert, intensely interested in the Mexican problem and fully able to pass judgment upon it.

Both Senators Fall and Hitchcock gave detailed accounts of the visit to the President’s sick room, each realizing the extent of the public interest in this phase of the matter.

Senator Fall said that he and his confrere were met at the door of the White House by Admiral Grayson, who shook hands with them cordially and escorted them to the elevator, which the admiral manipulated himself.

In response to inquiry as to whether there were any restrictions regarding the conference, Admiral Grayson said there were not, and it was a matter for the senators’ own judgment.

Mrs. Wilson met the two senators at the door of the sick room and escorted them to the President’s bedside. The President was lying on his back in bed with shoulders partly propped up by pillows. He wore a brown sweater to guard against exposure, leaving both his arms free. Naturally, the President showed the effects of his nine weeks’ serious illness by his pale and necessarily emaciated countenance, and a slight cold contracted in the White House grounds on Thursday, made speaking more difficult then otherwise would have been the case. He shook hands cordially with both Senator Hitchcock and Senator Fall, incidentally exploding one of the persistent rumors that has been going the rounds, namely that the President’s right hand was paralyzed.

Senator Hitchcock, according to Senator Fall’s account of the visit, explained to the President that they represented a subcommittee of the 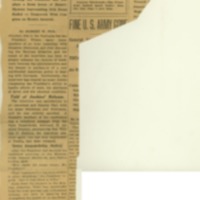