Woodrow Wilson delivers a speech at Carnegie Hall regarding Russia’s treatment of Jewish people living in that country.

Mr. Chairman and gentlemen, the object of this meeting is not agitation, it is the statement of a plain case in such terms as may serve to arrest the attention of the Nation with regard to a matter which is of no mere local importance, which does not merely affect the rights and essential privileges of our Jewish fellow citizens as freemen and Americans, but which touches the dignity of our Government and the maintenance of those rights of manhood which that Government was set up to vindicate.

The facts are these: For some 80 years a treaty has existed between this country and Russia in which it explicitly covenanted and agreed that the inhabitants of the two nations shall have the liberty of entering any part of the territory of either that is open to foreign commerce; that they shall be at liberty to sojourn and reside in all parts whatsoever of the territory thus opened to commerce, in order to attend to their affairs; and that they shall enjoy the same security and protection as inhabitants of the country in which they are sojourning, on condition, of course, that they submit to the laws and ordinances there prevailing, and particularly to the regulations there in force concerning commerce. For some 40 years the obligations of this treaty have been disregarded by Russia in respect of our Jewish fellow citizens. Our Government has protested, but has never gone protest. After 40 years of more correspondence the Russian Government naturally does not expect the matter to be carried beyond protest to action, and so continues to act as it pleases in this matter, in the confidence that our Government does not seriously mean to include our Jewish fellow citizens among those upon whose rights it will insist.

It is not necessary to conjecture the reasons. The treaty thus disregarded by Russia is a treaty of commerce and navigation. Its main object is trade, the sort of economic intercourse between the two nations that will promote the material interests of both. Important commercial and industrial relations have been established under it. Large American undertakings, we are informed, would be put in serious peril were those relations broken off. We must concede something, even at the expense of a certain number of our fellow citizens in order not to risk a loss greater than the object which would seem to justify.

I for one do not fear any loss. The economic relations of two great nations are not based upon sentiment; they are based upon interest. It is safe to say that in this instance they are not based upon mutual respect, for Russia can not respect us when she sees us for 40 years together preferring our interests to our rights. Whatever our feeling may be with regard to Russia, whatever our respect for her statesmen or our sympathy with the great future in store for her people, she would certainly be justified in acting upon the expectation that we would follow our calculations of expediency rather than our convictions of right and justice. Only once or twice, it would seem, has she ever thought our Government in earnest. Should she ever deem it in earnest, respect would take the place of covert indifference and the treaty would be lived up to. If it was ever advantageous to her, it is doubly and trebly advantageous now, and her advantage would be her guide, as has been ours, in the maintenance of a treaty of trade and navigation.

If the Russian Government has felt through all these years that it could ignore the protest of American ministers and Secretaries of State, it has been because the American Government spoke for special interests or from some special point of view and not for the American people. It is the fact that the attention of the American people has now been drawn to this matter that is altering the whole aspect of it.

We are a practical people. Like the rest of the world we establish our trade relations upon grounds of interest, not sentiment. The feeling of the American people toward the people of Russia has always been one of deep sympathy, and I believe of ready comprehension, and we have dealt with their Government in frankness and honor, wherever it appears that the interests of both nations could be served. We have not held off from cordial intercourse or withheld our respect because her political policy was so sharply contrasted with ours. Our desire is to be her friend and to make our relations with her closer and closer.

But there lies a principle back of our life. America is not a mere body of traders; it is a body of free men. Our greatness is built upon our freedom—is moral, not material. We have a great ardor for gain; but we have a deep passion for the rights of man. Principles lie back of our action. America would be inconceivable without them. These principles are not incompatible with great material prosperity. On the contrary, unless we are deeply mistaken, they are indispensable to it. We are not willing to have prosperity, however, if our fellow citizens must suffer contempt for it, or lose the rights that belong to every American in order that we may enjoy it. The price is too great.

Here is a great body of our Jewish fellow citizens, from whom have sprung men of genius in every walk of our varied life, men who have become part of the very stuff of America, who have conceived its ideals with singular clearness and led its enterprise with spirit and sagacity. They are playing a particularly conspicuous part in building up of the very prosperity which our Government has so great a stake in its dealings with the Russian Government with regard to the rights of men. They are not Jews in America; they are American citizens. In this great matter with which we deal to-night, we speak for them as for representatives and champions of principles which underlie the very structure of our Government. They have suddenly become representatives of us all. By our action for them shall be tested our sincerity, our genuineness, the reality of principle among us.

I am glad this question has been thus brought into the open. There is here a greater stake than any other upon which we could set our hearts. Here is the final test of our ability to square our policies with our principles. We may now enjoy the exhilaration of matching our professions with handsome performance. We are not here to express our sympathy with our Jewish fellow citizens, but to make evident our sense of identity with them. This is not their cause; it is America’s. It is the cause of all who love justice and do right.

The means by which the wrongs we compain of may be set right are plain. There is no hostility in what we do toward the Russian Government. No man who takes counsel of principle will have in his thought anything but purposes of peace. There need be for us in this great matter no touch of anger. But the conquests of peace are based upon mutual respect. The plain fact of the matter is that for some 40 years we have observed the obligations of our treaty with Russia and she has not. That can go on no longer. So soon as Russia fully understands that it can go on no longer, that we must, with whatever regret, break off the intercourse between our people and our merchants, unless the agreements upon which it is is based can be observed in letter and in spirit, the air will clear. There is every reason why our intercourse should be maintained and extended, but it can not be upon such terms as at present. If the explicit provisions of our present agreement can not be maintained, we must reconsider the matter in the light of the altered circumstances and see upon what terms, if any, of mutual honor our intercourse may be reestablished. We have advantages to offer her merchants, her mine owners, her manufacturers, which her Government will not despise. We are not suppliants. We come with gifts in our hands. Her statesmen see as clearly as ours. An intolerable situation will be remedied just as soon as Russia is convinced that for us it is indeed intolerable. 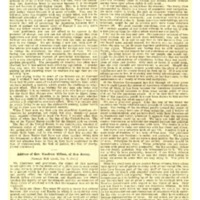