Grayson tells Edwin Alderman that Wilson’s dominate traits were courage, sincerity, and justice in response to his earlier letter.

Pressure of engagements and illness have delayed my reply to your letter, which I now take pleasure in answering.

As you well say, Mr. Wilson was not a simple personality, and, therefore, it would be impossible even in a long letter to analyze him completely. But these traits seem to have been outstanding in his nature:First, his courage – his determination to follow the course which seemed to him right no matter what the consequences to himself. Akin to that was his sincerity. There was no pose or hypocrisy in him. He had great power of conviction, and complete frankness in stating his convictions. Related to this was his devotion to principle. When he adopted a principle he followed it even though it might cause him the loss of personal friends and general popularity.

He was a democrat in the true sense of the word, a believer in the will and purpose of the people and a defender of the weak against the strong. Justice was his aim in all his thoughts and actions.

There is an epitaph in a Charleston, South Carolina, graveyard which Mr. Wilson himself was fond of quoting, and which appears to sum up his own character in a wonderful way:These words better than any phrases of mine describe Woodrow Wilson.

He was austere in his attitude toward life, but beneath the austere surface there was a heart as tender as a child’s.

In conclusion, permit me to express my satisfaction that it is you who are to “appraise and set forth to the public the character and services of Woodrow Wiklson.” Had he himself made the choice it would have fallen upon you, for he esteemed you highly as a man, and, as he said more than once, the most eloquent orator in the country. 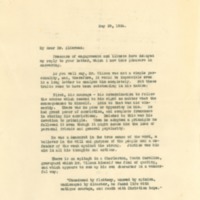