Although I have resigned from the Army, my devotion to its welfare continues and has become refined because it has been divorced from personal interest.

I have recently seen and talked to men who have been my comrades since we were all boys--enough of them to strike a faithful cross-section through the fabric of the Army. Many of these men are field soldiers of a type with whom you have had little contact, and some of them are of the more sophisticated sort that gravitates toward the capital. The reaction was frankly alarming.

I have never seen the morale of the Army so low, and, knowing your sincere personal interest, I am convinced that you will welcome the frank observations of a soldier in whom you have expressed some confidence.

I am informed that Frank Hines has been made a brigadier of the line and that Drake, Lord, and Churchill are being considered for appointment whiole men like Malin Craig, George Moseley, and Douglas MacArthur are not.

My dear Mr. Baker, I would do anything in my power to convince you that this is wrong. It is wrong not in an inconsequential, trivial way. It is wrong in a fundamental, lethal way. It sours and embitters the soul of the Army. It makes of that ancient, ordered profession a stithy of discontent and takes from it all confidence in the fairness and justice of the government toward its servants.

I admire your stanch support of General March, and I bring myself to say of him a thing unfavorable with reluctance since, while I shall always feel that he put me in a difficult position and then failed to support me, he did put me in the position.

The man is a Richelieu. With intense concentration on his own case before the public he has advanced Hines as his man who effectuated his overseas transport of troops. I hold no brief against Hines; but the Shipping Control Committee, and not even remotely Hines, disposed overseas transportation. When Mr. Swope and I analyzed the Division of Purchase, Storage, and Traffic to install the organization of July 18, we found that Hines’ duties were insignificant. He was a sort of glorified messenger boy between the Shipping Control Committee and the Division of Operations. This is a fair and accuratesstatement.

I think the records of the War Industries Board will bear me out in saying that those things for which Drake stood prevented our army from receiving motor transportation. I defy any man to disclose one single thing he did in Motor Transport that resulted in aught but hindrance to the supply of trucks. Churchill did well in a task of some importance. I sought far and wide for a man as Director of Finance because it was my opinion and the opinion of my advisers that Lord was not competent to fill the place in wartime.

Now soldiers are maintained with only one ultimate purpose--to fight.

I am informed that Craig planned the Argonne offensive. I know he was Chief of Staff of the First Army and that he came home honored by the respect and confidence of the professional soldiers of the world. Similarly, Moseley carried forward the logistics of this great campaign. Our army knows this. It sees the deeds of these men in the perspective of the traditions of our armies. It reflects that in point of men engaged, issues involved, intricacies of strategy, tactics, and logistics, these were the greatest military operations ever carried forward under our flag. They were successful operations. The war was anonymous, but its history will not be so. The cold hard truth is that the work of these men compares brilliantly with the records of our greatest soldiers--Lee, Grant, Sherman, Jackson, Washington, Scott, Taylor, and Green.

Knowing this, and watching the substantial acknowledgment of this nation, it discourages me, and I know that it sickens the very heart of the Army, to hear the fanfare of the trumpet of fame, to wait breathlessly for those to emerge whom the nation delights to honor, and then--to observe a procession of Drakes, Hines, and Churchills--little men thrown into favor by the stew of petty interests around the seat of power.

I trust you will pardon this presumption. I hesitated long before writing--not because I did not feel that you would welcome the view of one who knows the Army intimately, loves it devotedly, and is removed from personal interest, but because I was conscious of a slight bitterness and I try always to be fair. I did write the letter because after prayerful thought I know that it is just and fair and represents the honest view of so many informed and disinterested observers that you with your passionate devotion to even justice cannot fail to heed it. 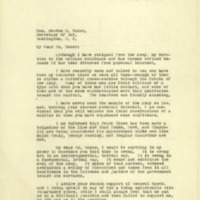