To: Commander in Chief, Atlantic Fleet.Subject: Attacks on Convoy by Submarines on the nights of 22 June, 26 June, and 28 June, 1917

1. About 10:15 p.M., June 22, the first group of the Expeditionary Force, of which the Flagship was the leader, encountered the enemy's submarine in Lat. N., Long W,

2. At the time it was extremely dark, the sea unusually phosphorescent; a fresh breeze was blowing from the northwest which broke the sea into whitecaps. The condition was ideal for a submarine attack.

3. Paragraph 3 gives the formation and names of the vessels together with the speed they were making and method of proceeding, nothing else. It is therefore omitted for obvious reasons.

4. Shortly before the attack the helm of the Flagship had jammed, and the ship took a rank sheer to starboard; the whistle was blown to indicate this sheer. In a few minutes the ship was brought back to the course. At this time the officer-of-the-deck and others on the bridge saw a white streak about fifty yards ahead of the ship, crossing from starboard to port at right angles to our course. The ship was immediately run off 900 to starboard at full speed. I was asleep in the charthouse at the time. I heard the officer-of-the-deck say, "Report to the Admiral a torpedo has just crossed our bow." General alarm was sounded, torpedo crews being already at their guns. When I reached the bridge the A and one of the transports astern had opened fire, the former's shell fitted with tracers. Other vessels of the Convoy turned to the right and left, in accordance with instructions. B crossed our bow at full speed and turned towards the left column in the direction of the firing.

5. At first it was thought on board the Flagship that the wake was that of a torpedo, but from subsequent reports from other ships, and in the opinion of Lieutenant X who was on the bridge, it was probably the wake of the submarine boat itself. Two torpedoes passed close to the A from port to starboard one about 30 yards ahead of the ship and the other under her stern, as the ship was turning to the northward. Captain Y reports the incident thus:

"Steaming in formation on zig-zag courses, with base course 75 degrees p.S.C., standard speed. At 10:25 sighted wake of a torpedo directly across our bow about thirty yards ahead of the ship. Changed course 90 degrees to left and went to torpedo defense stations. Fired two one pounder shots and one 5" shot from port battery in alarm in addition to six blasts from siren. Passed through two wakes; one being that from the U. S. S. C. in turning to northward, the other believed to have been from the passing submarine. A second torpedo wake was reported at about 10:35 from after lookouts. After steaming in various courses at full speed, resumed course 89 degrees p. s. c. at 11:10 for rendezvous, At 12:00 set course 56 degrees p.S.C. ------".

6. The torpedo fired at the D passed from starboard to port, about 40 yards ahead of the ship leaving a distinct wake which was visable for about four or five hundred yards. Colonel S was on the starboard wing of the bridge of the D at the time and states: "I first saw a white streak in the water just off the starboard bow which moved rapidly across the bow very close aboard. When I first saw it it looked like one very wide wake and similar to the wake of a ship, but after crossing the bow and when in line with it there appeared two distinct and separate wakes with a streak of blue water between. In my opinion they were the wakes of two torpedoes".

7. The submarine which was sighted by the Flagship was seen by the B and passed under that ship. The B went to quarters. When the alarm was sounded in the B, Lieutenant W. was roused out of his sleep, and went to his station and found unmistakable evidence of the presence of a submarine. He had been there only a few seconds when the radio operator reported "submarine very close to us". As the submarine passed the B and the Flagship's bow, and disappeared close aboard on our port bow, between the columns, it was followed by the B, which ran down between the columns, and when the latter resumed her station she reported that there were strong indications of the presence of two submarines astern which were growing fainter. The B was then sent to guard the rear of the convoy.

8. When I was in Paris, I was shown, by the US Naval Attache, a confidential official bulletin of information issued by the General Staff, dated July 6th, which contained the following:"Punta Delgada, Azores, was bombarded at 9:00 a.M., July 4th. This is undoubtedly the submarine which attacked the E on June 25th, 400 miles north of the Azores and sank the F and G on the 29th of June 100 miles from Terceira (Azores). This submarine was ordered to watch in the vicinity of the Azores, at such a distance as it was supposed the enemy American convoy would pass from the Azores."

9. It appears from the French report just quoted above, and from the location of the attack that enemy submarines had been notified of our approach and were probably scouting across our route. It is possible that they may have trailed us all day on 22 June as our speed was well within their limits of surface speed, and they could have easily trailed our smoke under the weather conditions without being seen; their failure to score hits was probably due to the attack being precipitated by the fortuitiouscorcumstances of the flagship's helm jamming and the sounding of her whistle, leading enemy to suppose he had been discovered.

10. The H, leading the 2nd group, encountered two submarines, the first about 11:50 a.M., 26 June, 1917, in Lat. -----N, Long. ---W, about a hundred miles off the coast of France, and the second two hours later. The I investigated the wake of the first without further discovery. The J sighted the bow wave of the second at a distance of 1500 yards and headed for it at a speed of 25 knots. The gun pointers at the forward gun saw the periscope several times for several seconds but it disappeared each time before they could get on, due to the zig-zagging of the ship. The J passed about 25 yards ahead of a mass of bubbles which were coming up from the wake and let go a depth charge just ahead. Several pieces of timber, quantities of oil, bubbles and debris came to the surface. Nothing more was seen of the submarine. The attacks on the 2nd group occurred about 800 miles to the eastward of where the attacks had been made on the first group. C.D.F. Subject: Attacks on Convoy by Submarines 22 & 27 June 1917.

11. The voyage of the Third Group was uneventful.

12. In the forenoon of 28 June, when in Lat. -----N-----Long. ----- W. the K opened fire on an object about three hundred yards distant which he thought was a submarine. The Commander of the Group, however, did not concur in this opinion, but the reports subsequently received from the Commanding Officer of the K and Lieutenant V are too circumstantial to permit the incident from being ignored. The Commanding Officer states:
"(b) The only unusual incident of the trip worth mentioning was on the 28th day of June about 10:05 a.M. the lookouts reported something right ahead of the K. (I had the bridge at the time). When I looked, I saw what appeared to be a very small object on the water's surface, about a foot or two high which left a small wake; on looking closer and with the aid of binoculars, I could make out a shape under the water about 250 to 300 yards ahead and which was too large to be a blackfish lying in a position about 15 degrees diagonally across the K's course.

"(b-1) I ordered the port bow gun to open fire on the spot in the water and sounded warning siren for Convoy; when judging that ship had arrived above the spot first seen, I ordered right rudder in order to leave the submarine astern.

"(b-2) A minute or two later, the port after gun's crew reported sighting a submarine on port quarter, and opened fire at the same time. The lookouts from the top also reported seeing the submarine under the water's surface and about where the shots were landing.

"(b-3) The ship kept zig-zagging and firing from after guns every time something was sighted.

"(b-4) Lieutenant V, U. S. N. was in personal charge of the firing and reports that he saw with all the gun crews and lookouts aft, the submarine fire two torpedoes toward the direction of the Convoy, which sheered off from base course to right 90 degrees when alarm was sounded.

"(b-5) All the officers and men aft had observed the torpedoes travelling thru the water and cheered loudly when they saw a torpedo miss a transport. They are not certain tho, which one it was, as the ships were not in line then and more or less scattered.

"(b-6) The Gunnery Officer and all the men who were aft at the firing are certain that they saw the submarine and the torpedoes fired by same."

(b-7) A separate report of Lieutenant V, USN. the Gunnery Officer, is herewith appended.

"(b-8) The K kept zig-zagging until it was considered that danger was past, and in due time joined the Escorts and Convoy formed column astern.

"(b-9) Report by signal was made to Group Commander of sighting submarines and torpedoes.

13. (Paragraph 13 deals exclusively with a recommendation as to the best methods to be employed in the future for the purpose of saving life. It is plain this ought not to be made public.)

14. Copies of reports of Commanding Officers flagship, A, D, and H are enclosed also copy of report of Lieut. V of the K. 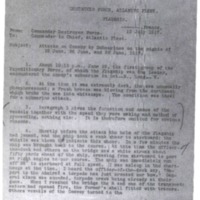