The Hull collection is composed principally of handwritten correspondence from Mrs. Hull to Mrs. H. McKelden Smith (Emily) between 1935 and 1953 in connection with the organization and operation of the Woodrow Wilson Birthplace Foundation of which she was first president. It is contained in 12 acid free folders. It is believed that the collection was left to the Birthplace by Mrs. Smith. There are no restrictions on its use.

Rose Frances Witz (Mrs. Cordell) Hull was born in Staunton, Virginia September 8, 1874, the daughter of Isaac and Frances (Heller) Witz. She was educated in Staunton, graduating from Mary Baldwin Seminary, now Mary Baldwin College, in 1894. On November 14, 1917 she married Cordell Hull who became Secretary of State under Franklin D. Roosevelt, holding that office from 1938 to 1944. In 1939 Mary Baldwin College awarded her its highest honor, the Algernon Sidney Sullivan Award. Mrs. Hull died in Staunton on March 15, 1954 and is buried in a crypt at the National Cathedral, Washington, DC.

The Rose Frances Hull papers consist almost entirely of handwritten correspondence from Mrs. Cordell Hull to Mrs. H. McKelden Smith during the years 1935 to 1953 and are concerned with the founding, fund-raising and operation of the Woodrow Wilson Birthplace Foundation. The period saw the purchase of the Manse, the official organization and charting of the Foundation, and the dedication of the Birthplace by President Franklin D. Roosevelt in 1941. Mrs. Hull shows interest in detail, from fund-raising to furnishing the Manse throughout her presidency of the Foundation. The correspondence also reflects the aura of official Washington in times of both war and peace and should have value for historians and students of the 30’s and 40’s.
The collection is housed in twelve acid free folders in a document box in the archives. Mrs. Hull’s letters to Mrs. Smith are arranged chronologically by year in nine folders; a tenth folder contains five undated pieces. The eleventh folder holds thirteen pieces of incoming correspondence from 1938-1944 to Mrs. Hull from twelve correspondents, arranged alphabetically by writer. The last folder contains six miscellaneous items including four letters from Cordell Hull and one from Franklin D. Roosevelt. 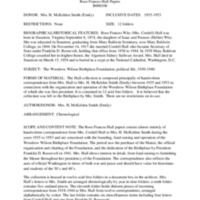