Mostly documents, including letters, brochures, certificates, and photographs. There is also a printed book of transcribed letters.

The collection is arranged in seven folders by category.

John Peter Ambuehl of Ada, Minnesota was drafted into the Army in 1917, and left on September 21, 1917 for Camp Dodge, Iowa. Throughout 1917 and 1918, Ambuehl was stationed at Camp Pike, Arkansas, Camp Greene in North Carolina, and Camp Mills, Long Island, New York before shipping out to France in May of 1918. Ambuehl died on 15 October 1918 from a stomach wound received in battle on 4 October 1918. He was buried first in France until his body could be shipped back to his family in Ada, Minnesota.

Aug. 2, 1917 Notice to J.A. to appear for physical.
Aug. 22, 1917 Notice to Draft Board that J.A. had no claim of exemption or discharge
May 22, 1918 Card indicating J.A.’s safe arrival in France
Aug. 5, 1918 Telegram from family to J.A. in Europe asking how he is
Nov. 11, 1918 Letter to J.A. from sister Elsie, date Armistice Day.
Postcard to Elsie Ambuehl, “Souvenir de Paris”
Song, “Keep the School Fires Burning” cut out of magazine
Pocket New Testament Bible
Personal notebook
Nov. 16, 1918 Telegram to Mrs. Ambuehl on notification of death of J.A.
Mar. 20, 1919 Letter from War Department on disposition of bodies
Feb 9, 1921 Acknowledgement from War Department on family’s wishes for disposition of body
Telegram to J.A. Ambuehl, Sr. on traveling arrangements of body
Feb. 24, 1919 2 telegrams to J.A. Ambuehl, Sr. announcing arrival of body
Letter from Quarter Master to relatives of J.A. on funeral proceedings
Notice regarding reimbursement of funeral expenses
Certificate, memorial for J.A.
Letter from State of Minnesota acknowledging death of J.A.
Mar. 10, 1919 Transcripts of 2 letters from Clarence J. Rohlfing, describing last days of J.A.
Photograph of Clarence Rohlfing

These papers consist of seven folders of official documents, letters, telegrams, and memorabilia of Pvt. John P. Ambuehl, who was drafted into the U.S. Army in 1917 and died in 1918. Included are transcripts of two letters from Clarence J. Rohlfing describing life at the front and Pvt. Ambuehl’s wounding. There are also two photographs: one portrait of Private John Ambuehl and one portrait of Clarence J. Rohlfing, as well as a collection of army life photographs that were originally housed in a photo album. 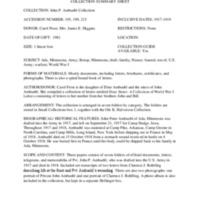 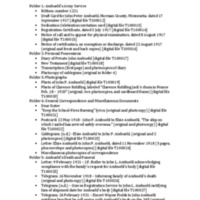