For the Chief of Staff. Weekly summary.

In the Ypres battle the British attack of October 4th gained a very important objective. German losses were material and when the consequences of this defeat are appreciated in Germany a resulting popular depression may be looked for.

The British success in Mesopotamia on September 29th will have a salutary moral effect in the Orient. The Turkish loss of nearly 5,000 prisoners combined with reports of destruction of ammunition at Haidas Pacha rail head Bagdad Railway opposite Constantinople, if confirmed should result in indefinite postponement of anticipated Turkish operations in Asia Minor notwithstanding weakening of Russians in the Caucasus.

Control of public opinion in Germany by government is fully demonstrated by result of propaganda for stiffening public support in favor of Germany's continuing the war for conquest of territories and indemnities. In support of these aims recently uncovered German propaganda in Allied countries seeks on the one hand to sow discord and range the Socialist and Pacifist elements against the Government in each country by depicting Germany in the role of subject pleader for peace, while on the other hand the more aggressive Allied press is stimulated to demand continuance of the war to achieve the dismemberment of Germany and immense conquest German territories, the purpose of the latter propaganda being obviously to cause a strong reaction of the German people in support of the Government.
Pershing. 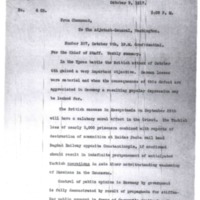