FREE TRANSLATION OF ARABIC LETTER.
To His Excellency, the President of the United States and the Representative of its Civilization, and the Extender of Knowledge and Education, the Adorner of Character not only, but of Mercy and Compassion, and the Preserver of Safety and Peace, the Head of the American Republic -- May God increase his Strength and Authority:

After these expressions of high regard, we humbly present to your Excellency this open letter, that you may be acquainted with our purposes, namely:

We have observed that the European War, so long continued, has been the cause of the destruction of millions of lives and endless property, so that there is neither rest for the dumb cattle in the pastures, lands have been devastated, and the people cannot sleep by night, nor live peaceably by day. Is it not true that the rulers of this world are as the shadow of God, and that He desires nothing save the protection of His creatures, and the extinction of religious and secular uprisings, so that all may dwell under His Shadow and Protection? Therefore God has given them power, and authority, and dominion, and majesty, and prosperity such as he has not given others; and therefore whatever they do of good is of more value than the good of ten thousands of other men in ordinary walks of life.


The Emperor of Germany, however, became great in his pride for conquest, and in the possession of a great army and navy, until he looked upon other rulers with the eye of envy and hatred, and he did not scruple to add new horrors to war, although the use of submarines was forbidden by international law. If he should, however, cease from this sort of warfare and make peace with other nations, God might still preserve his government, and others might then again look upon him with favor and ask God to grant him His mercy. In this prayer Moslems, Jews, and Christians might join. Now is the time when he should repent! Now is the fitting opportunity for expressing his regret!

But as for the Sultan of Turkey, in inverse proportion as he has wisdom, and knowledge, and power, he has shown not the least of good judgment in the direction of the affairs of his kingdom; and the present crisis of affairs in the great world overturning, although it might strike fear among those who love deceit, and continue to use flattery with him, should not have dismayed him, for they were not sincere toward God. If he would drive away these evil councilors, welcoming those who are sincere, the true lovers and patriots of religion, then, perchance, his kingdom would be restored to peace. As for the rest of the nations with them, they are more followers and not leaders.

But as for your excellent country, the United States of America, it has now cut off friendship and relationship with Germany and openly declared war, and we know that this will result in nothing else than the destruction of the pride of Germany, since Mohammed, the Prophet (Upon Him be Peace!) has declared: "Tread upon the proud until he forget his pride". Therefore it is proper that we continue the war until they repent. But alas! Some think the war will last a long time and extend still further (which may God prevent). Surely if the war continues, this will not be in accordance with your noble principles of humanity. Alas! Our Chinese Republic has already been compelled to do what your honorable Government has done, but we are persuaded that our country is weak in its condition, and disturbed internally by matters which occupy its attention, so that external warfare, especially in view of the smallness of our army and its equipment, would endanger the people of China, and cast us into the pit of destruction, and we would be of the number of those who suffer the horrors of war, while internal disturbances might then be multiplied in Asia and peace be destroyed, so that the war would be transferred from the West to the East, and all the ordinary occupations of life be interrupted.

Now, such conditions are not in accordance with the will of the Creator. We have observed, in addition to all this, that very frequently our Chinese Republic is glad to follow the example of your noble Government, just as the members of the body do its head; so if you will give the word, we will follow, and if you are patient, we will continue to be patient. We do not ask anything from you save the favor of using your influences to quench the fires of war in the world, and so you will secure everlasting remembrance, as God says in the Koran: "Is the reward of good anything else than lasting good?" He also said: "Verily the mercy of God is near to those that are good".

But as for the present condition of China, it is like the man who is suffering with terrible pains time after time, who desires to flee from his own severe internal malady, and finds it impossible; or like that of a village troubled with highway robbers and complaining from day to day to the authorities and to the soldiers, but the soldiers themselves have fled away. Verily, the hearts of the rulers of China are divided so that there is constant change, and there is no permanent responsibility. Now, is it possible for a country in this condition to declare war upon another country? We therefore turn to you and hope that you will arrange and give us good advice for the future affairs of our Republic, in order that prosperity and safety and peace may come to us speedily.

And whereas the distance between us and you is so great and difficult that we cannot come to you in person as your petitioners, we take the opportunity of sending this letter to you through the favor of our friend, Dr. Samuel Zwemer, who happens to visit us, hoping that he will find some means of forwarding it to your Excellency, on our behalf, that you may assist a people in the utmost need.

We remain,
Your obedient servants,

(Signed for all the leaders bythe Imam of the leading mosquein Peking, Professor of the mosque)
The Fifth of the Month of El Kaada 1335 A. H.(August 25th, 1917). 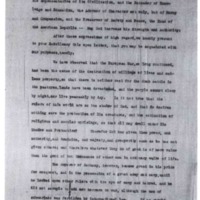