I want to tell you that the preliminary inquiry into the sources of trouble in our aeronautic department was finished Tuesday, save such extra data as are still trailing in, amplifying records.

I had hoped to have a good long personal talk with you, but what should have been a confidential, undisturbing search from within the War Department itself, which I had continuously plead for and which you so frankly aided at the very outset, met almost at once petty intriguing methods aimed to destroy or invalidate all information I sought.

I was disturbed. I knew if I made an issue of what was perfectly clear the inquiry itself would be in jeapordy, alarm given to those investigated and evidence destroyed. There was but a single course open to make the inquiry without aid.

I was conscious of the ethics in the situation and I realized that if I could locate the evidence I should not lose by securing it alone. I am glad now to tell you I have located those who are responsible, and how responsible and the Hog Island scandal shows none of the conspiracy evident everywhere in our aeronautics.

Of course I received information regarding the airplane company, with which your brother's name is connected. I also met directors of the financial institution which had loaned the money, and I felt and feel you and he were sacrificed to flag that committee and occupy it with a false alarm. Two officers in the Signal Corps are not clean in that business and I believe the matter should have been done another way and the work continued.

I want to thank you for your courtesy and confidence. 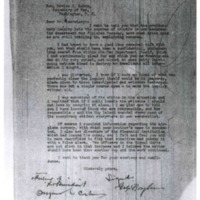