I should be very grateful if you felt able to communicate following to the President as a personal message from me.

We have received the following information from a source in touch with Count Czernin and there is every reason to believe that it has been communicated to us under instruction.Count Czernin is understood to be in favor of a separate peace but wishes to find a pretext for breaking with Germany such as that his hand has been forced by the Austrian nation. Public opinion in Austria is wearied by the way in which peace negotations with Russia are being spun out without results. The Emperor of Austria himself is in favor of a speedy peace as he fears the red wa Tension between Austria and Germany is greater now than at any time during the last four years. Germans are furious with Czernin and reproach him with having acted in such a conciliatory way as to cause the President to make peace proposals as if latter were victorious. If Austria could be given to understand that in concluding a separate peace she would obtain from America the financial assistance which is absolutely indispensable to her, public opinion would be strong enough to impose such a peace even on partisans of a "war to the end." The exped of America acting as an intermediary between Austria and the Entente is especially emphasized. This is the first authentic suggestion we have received that Austria is contemplating the possibility of a separate peace. It may be due to a passing mood. It may be part of some scheme to divide Entente powers. In any case however we are disposed in principle that matter should not be allowed to drop and that for many reasons the American Government is the one best able to deal with it effectively. If they are willing to do so I would venture very respectfully to suggest that while on one hand it is important that Count Czernin should not feel his message has been ignored so on the other hand no haste should be shown in coming to closer quarters with Austrian negotiation. All our accounts g to prove that the condition of Austria is very bad not merely economically but socially and if violent suppression of strikes in Germany stimulates revolutionary feeling in Austria, as well it may, this will probably combine with and reinforce Slav, Bohemian and Polish National aspirations which are threatening the unity of the Austrian-Hungarian Empire.

We know by experience that mere rumour of negotiations in Vienna on the basis of an undivided Austria not only causes great alarm in Italy but is at once used by Austrian diplomats as a proof that the Entente has abandoned the cause of all the subject nationalities under the Hapsberg rule, a support which greatly weakens our friendship and heartens our enemies. These however are considerations which are as familiar to USG. as to ours and though they show the extreme delicacy of the questions to be solved they indicate that of all the Entente powers America is in the best position to solve them. 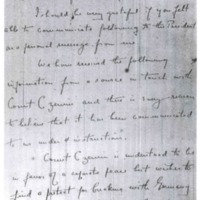