Paragraph 1. The following is in further reference to your number 14 dated January 21st, received in London, and your number 16 dated January 23rd, received in Paris. Your number 14 stated that General Pershing had approved, under certain conditions, the supply to the British of 150 battalions of American Infantry to be transported by British shipping and to serve with the British at the rate of 3 battalions per division, but that this project was contingent upon the supply of tonnage to us from Great Britain to accomplish our agreed minimum military effort of 24 divisions in France by about middle of July. You further directed me to discuss the matter with General Pershing in Paris before taking final action. On January 22nd had conference with Sir Joseph Maclay, British Minister of Shipping. He stated that under no circumstances could Great Britain give us additional tonnage to carry out our 24 division program. I said that in that event I must ask additional instructions before making arrangements to carry out the plans to send 150 battalions to serve with the British. He then said that he would send his principal shipping expert with me to Paris to further discuss the matter with Captain Jacob M. Coward of my staff. After final discussion in Paris, British still declined to give us additional tonnage for our program. Meanwhile, General Pershing told me that he had not approved the plan of sending 150 American Infantry battalions to serve with the British. On further discussion General Robertson, British Chief of Staff, General Pershing and myself, it was proposed by General Pershing that the British bring over the personnel of 6 complete divisions instead of 150 Infantry battalions. This new proposition was telegraphed by General Robertson to Mr. Lloyd George in London, who replied asking an interview with General Pershing and myself yesterday January 29th. On that date the matter was discussed in conference by Mr. Lloyd George, Lord Milner, General Robertson, General Haig, General Pershing, and myself, without definite result. Today the British in a document signed by Mr. Lloyd George accepted our proposition to bring over 6 complete divisions instead of 150 battalions. General Pershing in his number 555 has informed you of the conditions. I recommend immediate approval as the arrangements must be made at once.

Paragraph 2. At today's session of the Supreme War Council, the question came up of utilizing American troops now in France as battalions and regiments in the French and English armies. It was unanimously stated by British, FRENCH and Italian representatives that this was the only possible way to utilize American troops in the campaigns of 1918, and that it was vitally necessary to meet the apprehended German attacks. At my request this question was postponed for a short time. British and French insist that this use of our troops is necessary to insure safety of defensive lines in France against growing German attacks. It is probably that Supreme War Council will make demands for this use of all American troops at its present session.

Paragraph 3. The British, French and Italian military representatives have the support of their Prime Ministers and of at least one member their political Cabinets. The American position on the Supreme War Council would be stronger if there were on the Supreme War Council political representation. Would it not be well to designate American Ambassadors at London and Paris as our political representatives, who could be reenforced from time to time by a delegate direct from the administration in Washington? If this is approved, I suggest that immediate action be taken.
BLISS. 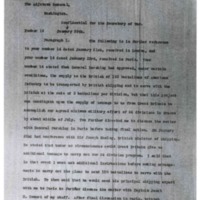