I am told that the Chief of Staff is returning within a day or two to Europe, and I am writing this letter in the hope that you will instruct him to discuss the whole military program with the military authorities of the Allied Governments with a view to enabling you to determining whether an unrestricted expenditure upon the part of the United States War Department is advisable, having in mind the restrictions which, I gather, the shipping problem will impose upon the transportation of troops and supplies for them, and the limitations which such expenditure by the United States War Department will necessarily impose upon the advances which might otherwise be made available by the United States Treasury to the Allies. As you know, an Inter-Ally Council has been organized in Europe with a view, so far as my purposes were concerned, to relating the demands for loans to the Allies to the demands for munitions, supplies and ships. Ships are the crux of the whole situation. The United States Treasury can, I hope, meet the demands of the United States and of the Allies if those demands are limited to expenditures which can be made promptly effective at the scene of war but expenditures cannot be made effective without the necessary ships, and the question at once arises as to whether or not the Allies shall be permitted to continue to make purchases of supplies requiring immediate advances by the Treasury for their payment without reference to the question whether tonnage can be found to send the supplies forward. The same question is presented in relation to the expenditures of the War Department. According to the best information I am able to obtain, it is unlikely that tonnage will be available to make effective at an early period the military establishment we are organizing here. Unless the demands of the Allied Governments and of the United States itself are coordinated with reference to the shipping problem and the financial problem, I am in grave doubt of the ability of the Treasury to meet the situation. The only organization which gives hope of producing such coordination is the Inter-Ally Council. I am, therefore, urging upon the President the addition to the American representation upon the Council of representatives of the War Department, the Navy Department, the Shipping Board and Food Administration. The financial problem of the United States is not so much one of resources as it is of the speed with which those resources can be safely mobilized. I have no doubt of the ability of the United States to bear the stupendous burden of financing the war if reasonable time is given for the effort. What gives me grave concern is the expenditure of money without apparent reference to the date when it can be made effective toward winning the war and the consequent danger that it may be necessary to withhold financial assistance desired for immediate use because of the expenditure of the United States and of the Allies for purposes which cannot be made effective because of shipping for many months to come.

I take the liberty, therefore, of suggesting for your consideration whether it would not be well to have the Allies consider, in connection with the demands which they make for military aid from the United States, the necessary relation which such demands bear to the extent of the financial and other assistance which the United States can render to the Allies' own military program.

If you and the President should think well of it, I should be glad to have the United States represented by a military officer, as well as by a financial secretary upon the Inter-Ally Council. Meanwhile, it seems to me that this second trip of General Bliss to Europe will offer an opportunity for obtaining some light upon the problems which I have suggested, informally if you like. Needless to say, Mr. Crosby will be glad to cooperate in every way with General Bliss if you should determine to instruct the General to take action on the lines suggested.

I am sending a copy of this letter to the President, so that he may be informed, if you think it worthy of discussion with him.
(Signed) WG McAdoo.

The Honorable
The Secretary of War. 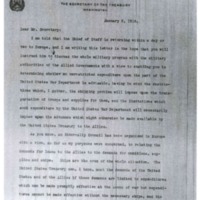