THB/gme
Dear Mr. Secretary
On Thursday night, and again on Friday morning, I received an urgent request from General Foch to go to his Headquarters in order to have a conference on Friday night with himself and General Pershing. I left here at noon and it required six hours to make the trip which ordinarily could be done in 2. The roads were encumbered with countless ammunition and supply motor trains, hospital trains, etc., all moving toward the battlefield. I had taken a very round-about way, much further to the West than on any of the previous trips I have made to General Foch's Headquarters, but it seems impossible at this stage of the game to get beyond the region of moving troops and supply trains. 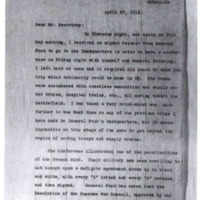