The German reply, by concentrating attention on a single sentence in the President's first telegram, is plainly designed to obtain a conditional armistice, which would be most disastrous to the cause of the Associated Powers. About naval terms they say nothing at all. About Military terms they assume that an undisturbed retreat for the German army to their own frontier has been already accepted in principle and that nothing remains to be done but to work out under military advice a few supplementary details.

We are well aware that this is not the President's view. Our experts assure us that the effect of any such policy would be to give the Germans what they most want "“ time to reorganize and a short and very defensible front. Peace negotiations carried on under such conditions could never secure the terms desired by the associated Governments. If, for example, the Germans broke off on such questions as Alsace Lorraine or Poland, the Allies would be compelled to give way or else to resume hostilities against an enemy refreshed and reorganized and so situated that every German, whatever his opinion, would feel that he was fighting, not for pan-German conditions, but for the soil of the Fatherland. What would inspire his troops would discourage ours; and all the fruits of victory might be lost.

It seems to us clear that any armistice must contain securities both against the resumption of hostilities by the enemy if peace negotiations unhappily break down; and probably also against any violations of the final Treaty of Peace when that is concluded.

In the opinion of our experts these ends can only be attained if the armistice provides:A. That some enemy territory, including at least Alsace and Lorraine, be at once occupied by Allied troops, andB. That adequate precaution be taken against the resumption of naval warfare.

We greatly hope that the President will not commit himself on these vital questions without previous consultation with the Allies. 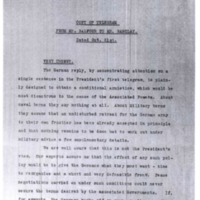