WOODROW WILSON,
President of the United States of America,
Whereas William J. Dodge was convicted in the United States District Court for the Western District of New York of making seditious utterances while the United States was at war, in violation of Section 3 of the Espionage Act as amended by the Act of May 16, 1918, and was sentenced September sixteenth, 1918, to imprisonment for six years in the State penitentiary at Baltimore, Maryland; and,Whereas the judgment was affirmed by the Circuit Court of Appeals, Second Circuit, and on October thirteenth, 1919, the Supreme Court denied a petition for writ of certiorari, and the defendant began the service of his sentence January twenty-second, 1920; and, Whereas it has been made to appear to me that the said William J. Dodge is a fit object of executive clemency:Now, therefore, be it known, that I, WOODROW WILSON , President of the United States of America, in consideration of the promises, divers other good and sufficient reasons me thereunto moving, do hereby commute the sentence of the said William J. Dodge to expire November twenty-second, 1920.In testimony whereof I have hereunto signed my name and caused the seal of the Department of Justice to be affixed.
Done in the District of Columbia this third day of September, in the year of our Lord, One Thousand Nine Hundred and Twenty, and of the Independence of the United States, the One Hundred and Forty-fifth.
By the President:
Acting Attorney General. 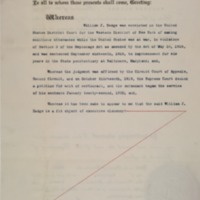