Changes and Additions to Draft of Bill

Changes and Additions to Draft of Bill

MEMORANDUM FOR CHANGES AND ADDITIONS TO DRAFT OF BILL.
Shall there be a limitation on the number of branches in relation to the deposits. That is, that no branch shall be organized with less deposits than (blank) amount.
Insert a clause to distinctly tie a depositor to a branch or a sub-branch. Prohibition that a depositing bank can have only one account with a branch or sub-branch is suggested to do this.
Insert provision to the effect that within five years the Federal Reserve Board shall sumbmit a plan and recommendation to the appropriate Committees of the House and Senate for the retirement and cancellation of greenbacks.
See Section 5136, National Bank Act, page 14 of N.C.B. book, powers that ought to be embodied; see that powers of Board are specified.
Section 4, dictated draft. It is necessary to provide that members of the Federal Reserve Board shall not be connected with any other financial institution.
Application of surplus earnings for the payment of the public debt. In connection with that read Mr. Fisher's memorandum regarding retirement of United States bonds.
In the event of dissolution, stock holders shall receive back par value and nothing more, and the balance shall be applied to the payment of the public debt. Insert in “Organization Section”.
Federal Reserve Bank should be exempt from state and local taxation, except with respect to tax on real estate. Page 13, line 20 of the Bill.
Put in a provision that the Bank shall have the right to contract.
Provide a short route for state bank to enter National system.
Provision in regard to by-laws and regulations to be made by the Federal Reserve Board.
State Bbank must submit to “inspection and regulation”. Leave out the word regulation?
If a bank fails to comply with the provisions of the law and the regulations of the Board, what is to happen to it? That is, what is to be the character of the control of state bank members who fail to comply with the provisions of the law.
Members of the Board shall devote their entire time to their duties. Insert “entire time”.
Requirement that Federal Reserve Board shall publish weekly a statement of the condition of the Federal Reserve Bank as to certain items which will be specified in that clause, and if the Bank wants to publish a statement of all members bank they must furnish a statement weekly or otherwise. “(Powers of Board, page 20 of the bill.)
Machinery for the printing and delivery of the notes to the Bank. Auditing of the notes should be done by the Government. This all should be at the expense of the Government. Also provide machinery for redemption. Notes should go to the proper Government bureau for cancellation upon presentation for redemption
It should be mandatory upon the Government to issue notes upon the application of the Federal Reserve Board.
Federal Reserve Board should have power to fix “the form and tenor of such notes”. See Glass-Owen Bill.
Power to reissue notes when they are presented for redemption.
Clause in Act to repeal section of National Bank Act in regard to distinction between country, reserve and central cireserve city banks.
Ten per cent. tax provision on state bank notes must not apply.
Power to remove any officer or employee except those appointed by the President. Section 202, page 83 N.C.B. book.
Give Board power to “perform the duties and exercise the functions necessary or convenient to the carrying out of the provisions of this Act”. Substitute for present paragraph giving “implied” powers.
There should be provision for depositors in insular possessions under the provision where the Federal Reserve Bank, including its branches and sub-branches, shall be the fiscal agent and sole depository of the government. See pate 28 of the bill.
Insert “temporarily for transmission” in the above paragraph where the NBank and its branches are made the depositories of the Government, “and the Secretary of the Treatsury may designate other depositories temporarily, etc”
There should be provisions limiting the receipt of deposits to the Government and member banks, and for domestic transactions except as provided in the paragraph relating to open market operations.
The Act must specify the following things: (1) the right of a depositing bank to a discount, and (2) the right of a depositing bank to get notes of the Bank against discounts or its balance. The clause providing for the latter should contain, “so far as not violating the reserve provisions of the Act”.
Read provision regarding collection of items in connection with line 23, etc., page 22 of the bill.
The Federal Reserve Board shall make reports to Congress and the reports shall be accompanied by the certificate of the Comptroller of the Currency as to audit, and there should be stated periods provided for this.
No new bank need buy Government bonds.
No existing bank need own Government bonds.
Twos shall be made specifically maturing in 20 years. Each year the Government shall buy on tender, at not exceeding par, up to $20,000,000.
Shall no longer have privilege of securing circulation.
Repeal the classification of central reserve cities.
Leave out Sec. 21.
Leave out savings bank clause.
Give power to call for reports as well as make examinations at their discretion. Make Comptroller’s reports available to the Federal Reserve Board.
Provision in regard to enlarging powers of national banks, which would invclude or would not include power to establish domestic branches, power to establish foreign branches, power to conduct business of trust company where permitted by laws of various states.
Adapt a form of Stock Ctfe-Bonds for transfer etc- 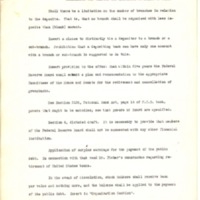