UNCOMPLETED MATTER
Language specifying the right of a depositor to obtain a discount which must be limited by the reserve provisions of the Act, etc.
The Controller of the Currency shall make an annual examination of the Federal Reserve Bank and its branches and the Board shall make an annual report to Congress or to the Speakoer of the House, accompanied by a certificate of the Controller of the Currency as to the examination.
No new national bank required to buy Government bonds.
No existing national bank required to maintain Government bonds on deposit with the Treasurer of the United States except for an amount sufficient to secure outstanding national bank notes.
All two per cent bonds which have the circulation privilege and which are not refunded into refunding notes shall be purchased on tenders at not exceeding par and accrued interest and to an amount not exceeding $20,000,000. per annum until the rentire amount is retired and cancelled with authority to the proper officers to issue a new bond to be authorized or to issue bonds which have already been authorized for the purpose of such refunding.
Provision that pending the retirement of all 2/s no impaitrment of the circulation privilege shall occur by reason of the Act and at the end of twenty years after passage of the Act no national bank shall hereafter have the privilege of issuing circulating notes. 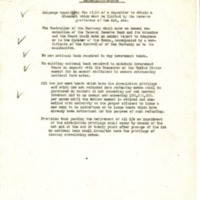