FIRST REVISE.
STOCK ISSUE.
Sec. 5. That the capital stock of the Federal Reserve Bank shall be $100,000,000, divided into 1,000,000 shares of a par value $100 each; such stock shall have no voting power and shall be free of all Federal, State, Municipal, or other taxes, except that the holders thereof shall be subject to the provisions of Federal income tax laws with respect to the income derived therefrom. The holders of such stock shall be entitled to dividends thereon at the rate of five per centum per annum and no more, which dividends shall be cumulative.Such stock shall be offered for popular subscription at par by the Committee under regulations to be prescribed by it. In case the amount of capital stock is over-subscribed, the Committee shall first allot the shares of stock to the subscribers for the smallest number of shares. In case the full amount of the capital stock is not subscribed for, the Committee shall allot the portion unsubscribed for to the several national banks in existence at the date of the public offering in proportion, as nearly as may be convenient, to their respective amounts of capital, and each such allotment shall fix a liability upon each of the said national banks to subscribe for and take the number of shares so allotted, such liability to accrue as of the date of public offering by the Committee.Any subscriber failing to pay for the shares allotted to him at the time required by the Committee shall forfeit his right thereto and such shares may thereupon be allotted to other subscribers by the Committee. Every subscriber shall accompany his subscription by cash or a certified check for five per cent. of the total amount thereof, such five per cent. of the subscription to be forfeited upon failure of the subscriber to pay his subscription for the amount allotted to him in full, as above provided. The Committee shall call for such subscriptions and make such allotment within six months of the date of the passage of this Act, and the balance of the subscription shall be paid by each subscriber upon the amount allotted to him by the Committee pupon a date to be fixed by the Board, at a period within six months from the date of allotment, provided that the date upon which such subscriptions shall become payable may be extended by the Board, with the approval of the President of the United States. The proceeds of the five per cent. payment of the stock subscription, shall be deposited in national banks to the credit of the Committee, and by the Committee assigned and transferred to the credit of the Bank upon its organization. Upon the payment of the ninety-five per cent. residue of the stock subscription, the proceeds shall be deposited with national banks by and to the credit of the Bank, and shall be so kept on deposit pending the opening of the Bank for business.Sec. 56. After the entire capital of the Bank shall have been subscribed or for, popular subscriptions to the capital stock of the Bank shall have been closed, the Committee shall make an organization certificate specifying(a) The names of the several subscribers to the stock, with the respective number of shares subscribed for;(b) The form of stock certificate adopted by the Committee and the methods of the transfer thereof and such other facts oin connection with the organization as the Committee may determine.Such certificate shall be executed under the name of the Committee by the Chairman and Secretary thereof and attested with its seal and shall be forthwith transmitted to the Comptroller of the Currency, who shall file, record and carefully preserve the same in his office. 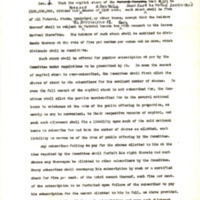