STATE BANKS AS DEPOSITORS.
Sec. 28. That from and after the organization of the Bank any bank or banking association or trust company organized under any law of any state or under any law of the United States relating to the District of Columbia may make application to the Board and shall buy the Board be authorized to become a depositor in the branch organized or to be organized within the district where the office of the applicant is located, but before granting such application, and from time thereafter, the Board shall satisfy itself that no provision of the charter of such applicant or of any law applying to such applicant prevents a lawful compliance by the applicant with the requirements of this Act and the regulations of the Board, and unless so satisfied the Board shall refuse such application or require the retirement of such depositor.Before being admitted as a depositor, and during the period when it shall continue as a depositor, each applicant shall comply with the regulations promulgated from time to time by the Board, and with the following requirements:
(a) To establish and maintain a reserve of the character defined in this Act equal to twelve per cent. of its net deposits;
(b) To establish and maintain a paid-up and unimpaired capital to an amount not less than that required under the provisions of Section 5138 of the Revised Statutes of the United States, as amended;
(c) To be subject to such examinations of its books and affairs as the Board may from time to time direct;
(d) To prepare and submit reports of its condition and transactions at such times and in such forms as the Board shall direct.Upon the issue of a certificate of authority by the Federal Reserve Board each such applying bank each applicant shall become entitled to have all the rights and privileges enjoyed by national banks as depositors in the Federal Reserve Bank.
If at any time it shall appear to the Board that anuy such applicant who has become a depositor has failed or ceased to comply with the provisions of this section or the regulations of the Board, it shall be within the power of the said Board to require such depositor to surrender its rights as a depositor and to pay and discharge in full any and all of its obligations to the Bank and to the United States.
No such applicant admitted as a depositor may surrender its right or withdraw from its obligation as such until after the expiration of one year from the giving by it of to the Bank of a written notice of its intention so to do, nor unless and until it shall have paid or discharged in full all indebtedness and obligation of every kind owing by it to the Bank and to the United States. 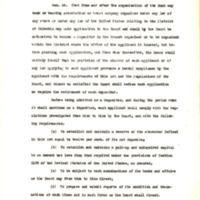