My dear Mr. Secretary:
Referring to my separate letter of this date in regard to the acceptance regulation, I think I should advise you that the Board of Directors of this Bank has given instructions that the advice of competent counsel should be obtained as to whether transactions in bankers acceptances, some part of the procceds of which may be applied to the purchase of munitions of war and other contraband articles in this country, might, through the banks, involve the government in any violation of neutrality. The question is presented in two forms:
First:  When such transactions are conducted solely by the national banks,
Second:  When the acceptances resulting from such transactions are purchased by the Federal reserve banks or rediscounted with the Federal reserve banks by member banks.
Permit me to suggest the desirability at this time of our having from the proper officers of the government such advice or information on this subject as will enable both the Federal Rreserve Board and the Federal reserve banks to govern their proceedure in accordance with the wishes of the administration.
As stated to you last Friday, the same question arises with regard to loans which may be negotiated in this country by belligerent foreign governments, notwithstanding that the proceeds of such loans may be used, or, in fact, specifically appropriated for making payment for articles of export. Since our meeting, I have studied Secretary Bryan’s letter of January 20th and feel convinced that it should not be made to apply to transactions undertaken at this time under present conditions. This view is strengthened by reading Secretary Lansing’s letter of August 12th addressed to the Government of Austria-Hungary, in which the sale of munitions of war to belligerents is desciribed as “legitimate trade”.
I had hoped to write to you fully on this matter to-day, but find it impossible to do so until the latter part of the week.
With cordial regards, I beg to remain,
Very truly yours, 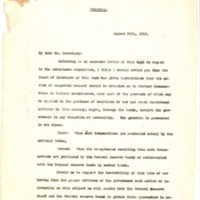