Dear Mr. Secretary:
Your favors of the 6th and the 7th were received yesterday, and as advised by wire, as per confirmation enclosed, I took the matter up at once with Mr. Wiggin, hoping to effect an arrangement with him by which the New York subscribers might be again approached at once to increaseIincrease the amount of their subscriptions to the cotton loan fund. He informed me that he had already sounded five of the largest subscribers and was reluctantly compelled to discontinue his efforts along that line, fearing that some of them would make an effort to withdraw from their present commitment. He has indicated, holwever, that asfter the lapse of a few days he will take it up with them again, and endeavor to secure such assurances from them as will facilitate the completion of the fund without further delay.
I feel very confident that he is heartily in sympathy with your efforts, and will do everything in his power to further them. Later today I hope to telephone you again on this matter, after sounding the officers of some of the other banks.
The situation in Boston seems to be prarticularly unfortunate, so far as I can gather from reports received here. Theltre still seems to be some doubt in their minds as to the legaltiity of the operation, concerning which, of course, there should be no doubt whatever.
Yours very truly, 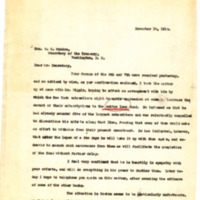