The President of the United States

To all who shall see these presents greeting:

Know ye, that reposing special trust and confidence in the patriotism, valor, fidelity, and abilities of George G. Gatley, I have nominated and by and with the advice and consent of the Senate do appoint him Lieutenant-Colonel of Field Artillery in the service of the United States: to rank as such from the twelfth day of June nineteen hundred and sixteen. He is therefore carefully and diligently to discharge the duty of Lieutenant-Colonel by doing and performing all manner of things thereunto belonging.

And I do strictly charge and require all Officers and Soldiers under his command to be obedient to his orders as Lieutenant-Colonel. And he is to observe and follow such orders and directions from time to time as he shall receive from me or the future President of the United States of America, or the General or other Officers set over him, according to the rules and discipline of War.

This Commission to continue in force during the pleasure of the President of the United States for the time being.

Given under my hand at the City of Washington this twelfth day of July in the year of our Lord one thousand nine hundred and sixteen and in the one hundred and forty-first year of the Independence of the United States.

By the President,
Woodrow Wilson

[Seal of the War Department, United States of America] 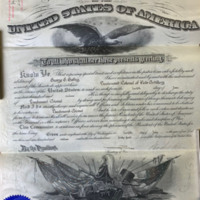