Your letter describing your visit to Jessie came this afternoon and was delightful. It was a relief to my mind to know that yours had been relieved by the receipt of my later letters. I had another letter from Stockton today, – it is still cheerful and confident though he confesses that he still has bad times; that it is “a simple case of nervous prostration” and the doctors say will “take time.” To my great disappointment the Maine fishing trip has fallen through. He wrote to the Mr. Tedcastles telling him about his depression, and that he was doubtful about imposing himself on them in such case. Mr. T. answered that Dr. Wood thought the Maine lakes too exciting for nervous patients on account of the altitude so he “would not press him to go”, and invited him to visit them at Clifton later.— It is too bad because in Maine there would have been something interesting to do; — and there isn't in Va.,–that is the weak point in the latter plan. He thinks he will try it however next week,—since the doctor says he must not go to the backwoods alone,– and he wants to know if I cant go with him for a few days. I suppose I must,– so don't be surprised or alarmed if you hear that I have run off! I should like to send Madge with him for she could stay, – and perhaps I will send her. Only unfortunately Stockton confessed to me in Phila. that he was'nt very well acquainted with Madge, thought her rather cold-hearted, and in short didn't love her as much as he did me and you and Ed! But “she's all right” at bottom and an experience like this would probably make a woman of her. At any rate she will be here to stay with the children. We are all quite well and in excellent spirits.

I must tell you something amusing – in a way; Jessie came in to lunch dinner very red and embarrassed because she had been putting some wreaths of flowers on the grave of “Catherine Bullock”—one or two other girls standing by – when a party of students passed and laughed at them very heartily. It was rather pretty in them to think of such a thing,—wasnt it?No news except that Dr. Patton's son Frank married today and I actually remembered to send cards! Oh! and your check for over $7,000 from Harpers came tonight. I will keep it until you return. 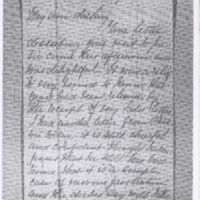