I enclose with your letters Mr. Thompson's note about the chimneys; if it is satisfactory to you,–as it is to me,–please drop me a line by the next mail to that effect and I will tell them to go ahead.

The Pattons went out yesterday turning over the keys to me. Today the paperers have begun scraping the walls, the papers being all in the house. Mr. Titus and I also settled about the blue carpet and he begins work on it tomorrow. It will cover Father's room and the back hall. It is a comfort to have something actually begun.

I also enclose a note from Mr. Cope. Isn't it kind in him? I of course begged him to set his own time, so he came today at two, and we had our consultation at “Prospect.” He says the most important things is to get out that mantle, and of about equal importance to take out that high wash-board panelling. He wants just a heavy chair rail a good deal lower. I think it is ugly too but I told Mr. Thompson I would not take the responsibility of ordering it taken out without at least consulting some one member of the committee; so he is going to speak to Mr. Henry. Mr. Thompson is eager for these changes and says he has the money to pay for them, and also for all the painting, saved from some other sum he had control of for work on “Prospect." Mr. Cope asked Mr. T. who was our decorator,– and was told that we were trying to do it ourselves to save money. He offered to make the little drawings of mouldings, &c. Mr. Thompson it seems thanked him but intimated that we had no money for such purposes, and Mr. Cope was quite surprised, and said he had not had the slightest idea of charging for his advice or assistance,– that it was a great pleasure to render it & begged him to tell Mrs. Wilson so. I was much relieved for I had been a little afraid when he came down especially on this business that I had got myself into trouble. It is a great load off my mind to have his authority to support me in these changes.

Just after my return from Prospect Dr. Elmer came in. He and his wife had driven over for pleasure, and he very kindly stopped to see how my shoulder was doing. He looked at it and said it was all right.

I go into New York tomorrow just for some odds and ends and to look in those 4th Ave. shops for a mirror. Mr. Cope thinks that all-important. Mr. Thompson is having a friend look for one in Georgetown and Alexandria. — Then I must go to Flints about the washstand; we won't need it, you know, now that we are to have a bath-room. What do you think I ought to get for the room instead,–a solid handsome table or a pierglass? I shall look tomorrow but not decide till you give me your opinion. — I enclose dear little Nells letter received today.— Just here young Sloane called and stayed late! I shall have to stop. All are well, weather glorious again, a storm yesterday put an end to the humidity that was oppressing us. 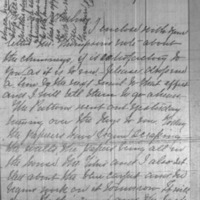