Printed sheet music, most of it from the years of the Wilson administration.

The music is arranged alphabetically by title.

“America’s Leader: A Statesman, and a Patriot True, America is Proud of You Our Leader Woodrow Wilson”; published by Luke A. Keenan; 1916

“Be Good to California, Mr. Wilson (California Was Good to You); words by Andrew B. Sterling; music by Robert A. Keiser; 1916

“Don’t Be Anybody’s Soldier Boy But Mine”; words by Joe Lyons; music by Frank Magine; 1918

“Fall into Line for Your Motherland” as sung in the All-Soldier Show The Army Play by Play; words by President Woodrow Wilson; music by Dr. Frank Black and John Golden; 1916; cover contains the text of a letter by President Wilson, in which he thanks the producer for “cho[osing] the words for the song from my speeches”

“Father of the Land We Love”; written for the American people by George M. Cohan to commemorate the two hundredth anniversary of the birth of George Washington; 1932 - signed

“Gone,” Lovingly Dedicated to the Memory of Woodrow Wilson; words and music by
Marie Bruch; 1924

“I Didn’t Raise My Boy To Be a Soldier”; words by Alfred Bryan; music by Al Plantadosi; 1915

“I Want a Girl (Just Like the Girl That Married Dear Old Dad)”; words by Will Dillon; music by Harry Von Tilzer; 1911

“It’s Time for Every Boy To Be a Soldier”; words by Alfred Bryan; music by Harry Tierney; 1917

“Joan of Arc They Are Calling You” (2 copies, from different sources); words by Alfred Bryan and Willie Weston; music by Jack Wells; 1917

“Liberty Calls”; words and music by Caroline B. Reynolds; 1917

“The Man Behind the Hammer and the Plow: A Song Every American Should Learn”; words and music by Harry von Tilzer; 1917

“Marche Aux Flambeaux” composed by G. Meyerbeer on the occasion of the betrothing of a princess of Prussia; arranged by Edward F. Rimbault; no date, but a handwritten, penciled note says that the music was probably written not long after 1850, and signed T. Elbus

“The Rose of No Man’s Land: (La Rose Sous Les Boulets)”; a song about the Red Cross nurse; 2 copies, with different covers; by Jack Caddigan and James A. Brennan; French text (printed above English words) by Louis Delamarre; 1918

“Somewhere in France Is the Lily”; words by Philander Johnson; music by Joseph E. Howard; 1917

“The Staunton Quick Step” composed for the Piano Forte, and respectfully dedicated to his friend J. B. Breckinridge Esq. (of Staunton Va.) by Sigr. G. George; 1844

“The Trail of the Lonesome Pine”; words by Ballard MacDonald; music by Harry Carroll; 1913

“Washington” (Dedicated with reverent love and profound respect to the Capital City of the United States of America); words by Jessie I. Pierson; music by William T. Pierson; 1920

“We’re Going Over”; by Andrew B. Sterling, Bernie Grossman, and Arthur Lange; 1917

“When I Gets Out in No-Man’s Land (I Can’t Be Bother’d with No Mule),” words and music by Will E. Skidmore and Marshall Walker; 1918

“When I Return to the U.S.A. and You”- March Song (To Our Honored President Woodrow Wilson); words by Olivia Fariss Dinkins; music by Myrtle Mae McCay; 1910

“When Yankee Doodle Learns to ‘Parlez Vous Francais’”; words by Will Hart; music by Ed Nelson; 1917

“Where Do We Go From Here?”; by Howard Johnson and Percy Wenrich; 1917

“Will You Remember (Sweetheart)”; words by Rida Johnson Young; music by Sigmund Romberg; 1917

“Wilson’s March to the White House”; by Alice Musser Cauley
“The Woodrow Wilson Inaugural” March and Two-Step; by Newton B. Heims and Jacques Hertz; arranged by W. Lewis; 1913

Of particular note, the collection contains sheet music entitled “The Staunton Quick Step,” which was composed in 1844 for a resident of Staunton, J. B. Breckinridge, Esq.

Almost all of the sheet music is from Wilson’s time period. The following themes are addressed by some of the lyrics: Princeton University, Wilson’s presidential campaign and 1913 inaugural, celebrating/commemorating Wilson’s presidency and life, World War I (romantic, folksy, ethnic), the Red Cross nurse, and patriotism. Wilson period songs range from 1906-1920, including one from Ziegfeld Follies. Musical styles include waltzes and marches, and some music was written specifically for piano and stringed instruments. 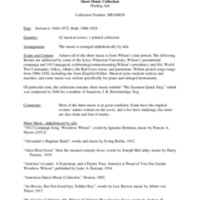