Correspondence is arranged by person beginning with Mr. and Mrs. George Harrison (Gordon’s mother and stepfather), and then chronologically. Everything else is arranged chronologically as long as the materials are dated, except for the items in Folder 20, which are arranged by bulk and size. Note: Letters addressed to both Mr. and Mrs. Harrison are included in the letters addressed to solely Mrs. Harrison because they are written more for her, as Gordon notes anything to George on the side.

1 14 The White House to Gordon Grayson
December 6, 1940
Invitation to a small dance from Eleanor Roosevelt

PHOTOGRAPHS:
4 small photos: 3 with a horse, 1 with 3 other people
Gordon pictured in all four
Accompanied the Nov. 2, 1943 letter to Mrs.
Harrison
Man with a bicycle
Undated
Children on Sleds
Undated
Gordon Grayson, “Portrait of Distinction”
Undated

Lt. James Gordon Grayson was one of three sons of Cary T. Grayson, who was the personal physician to President Woodrow Wilson. The Grayson family resided mostly in New York City, Washington D.C., and at their horse farm, Blue Ridge Farm, in Virginia. As encompassed by this particular collection, he served as an Assistant Naval Attache for the United States Embassy in Colombia during World War II. In the years following the war, Gordon attended Law School in Charlottesville, presumably at the University of Virginia, and in the late 1940s and early 1950s he worked for a bank, presumably the World Bank, for which he completed several mission trips to Bogota, Colombia. Aside from his career, Gordon Grayson was very fond of socializing, traveling, polo, and horses in general. He was very well educated and enjoyed being of use to his country, his family, and his friends.

The documents in this collection are all original and consist mostly of Gordon’s letters to home during his World War II and World Bank services in Colombia and his travels in California and Europe. However, more than half of his collection encompasses his time in South America during the Second World War. Materials as early as 1929 and as late as 1953 are included, and are divided into the following series: General Correspondence, Newspaper Clippings, Miscellaneous, and Postcards and Photographs.

The Newspaper Clippings include a small story about the conservation of hot water in wartime France that Gordon had sent to his mother, whom he thought would find it amusing, as well as a larger story concerning the visit of vice Admiral Allan G. Kirk to Cincinnati for the observance of Navy Day, which Gordon was present for and is pictured. The Miscellaneous folder consists of anything that is not a letter, newspaper, postcard, or photograph, and includes materials from Gordon’s childhood. In the Postcards and Photographs series, several photographs can be seen of Gordon Grayson and his horses, among a few others.

Gordon Grayson’s letters encompass an array of information on the business of horse breeding, training, and racing. Constantly giving his parents advice as to what should be done with the horses on the farm back home, many of his letters include detailed descriptions of the business at their family farm known as Blue Ridge Farm, which is located in Uppersville, Virginia.

Gordon also provides an interesting insight into Colombian society with some notes on the political situation at various election times. As he saw much of World War II from his station in Bogota, Colombia, Gordon often laments at not feeling useful enough to the war effort. In the meantime, he provides a look at how the war was affecting other areas of the world through censorship and shipping difficulties.

In general, Gordon Grayson’s collection is a good resource for a look at how an early twentieth century wealthy family functioned in addition to acting as a window into the personality and daily life of Gordon himself. 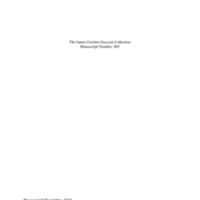