Archival finding aid for the Wallace McClure Collection which includes pamphlets, speeches, and periodicals having to do with President Wilson's time in office.

Wallace Mitchell McClure was born in Knoxville, Tennessee, on July 30, 1890. He was the oldest of four, born to William Kyle McClure, born Nov. 9, 1863, and Eliza Parsons Lewis, born January 18, 1870; they were married in Knoxville, TN on June 18, 1889. A search of Claynet.com reveals that Wallace Mitchell McClure was roughly a tenth generation descendant of James McClure who was born in Northern Ireland in 1670 and died in Virginia, USA sometime after 1739.

In 1911 he was admitted to the local bar at Knoxville and in 1920 to the United States District Court. He practiced in Knoxville as a member of Sansom and McClure from 1916 to 1917.

This collection consists of newspaper clippings, newspapers, pamphlets, periodicals, diary pages, unpublished speeches, correspondence, State Department papers, loosely bound and unbound League of Nations volumes, books, and various miscellaneous documents and memorabilia. As McClure was an admirer and avid collector of “all things Wilson,” there is an abundance of material on the life and contributions of the 28th president. 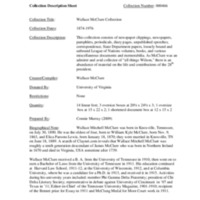 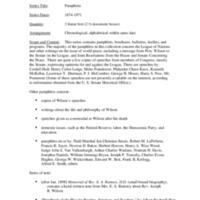