ON THE ADJOURNMENT OF CONGRESS THE PRESIDENT ISSUED THE FOLLOWING STATEMENT:

A group of men in the Senate have deliberately chosen to embarrass the administration of the gobernment, to imperil the financial interests of the railways systems of the country, and to make arbitrary use of powers intended to be employed in the interests of the people.

It is plainly my duty present duty to attend the Peace Conference in Paris. It is also my duty to be in close contact with the public business during a session of the Congress. I must make my choice between these two duties, and I confidently hope that the people of the country will think that I am making the right choice. It is not in the interest of the right conduct of public affairs that I should call the Congress in special session while it is impossible for me to be in Washington, because of a more pressing duty elsewhere, to cooperate with the Houses.

I take it for granted that the men who have obstructed and prevented the passage of necessary legislation have taken all of this into consideration and are willing to assume the responsibility of the impaired efficiency of the government and the embarrassed finances of the country during the time of my enforced absence. 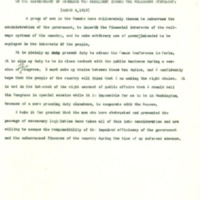