Statement for the Press:

Last night the committee of the conference charged with the duty of drafting a constitution for a League of Nations concluded its work and this afternoon before leaving for the United States it is to be my privilege and duty to read to a plenary session of the conference the text of the 26 articles agreed upon by the committee.

The committee which drafted these articles was fairly representative of the world. Besides the representatives of the United States, Great Britain, France, Italy and Japan, representatives of Belgium, Serbia, China, Greece, Roumania, Czech-o-Slovakia, Poland, Brazil, Portugal, actively participated in the debates and assisted materially in the drafting of this constitution. Each article was passed only after the most careful examination by each member of the committee. There is a good and sufficient reason for the phraseology and substance of each article. I request that I be permitted to go over with you article by article the constitution before this part of the work of the conference is made the subject of debate of Congress. With this in view I request that you dine with me at the White House as soon after I arrive in the United States as my engagements permit.”

The dinner has been arranged for Wednesday evening, 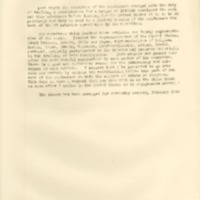