My Fellow Countrymen: The Congressional elections are at hand. They occur in the most critical period our country has ever faced or is likely to face in our time. If you have approved of my leadership and wish me to continue to be your unembarrassed spokesman in affairs at home and abroad, I earnestly beg that you will express yourselves unmistakably to that effect by returning a Democratic majority to both the Senate and the House of Representatives. I am your servant and will accept your judgment without cavil, but my power to administer the great trust assigned me by the Constitution would be seriously impaired should your judgment be adverse, and I mjust frankly tell you so because so many critical issues depend upon your verdict. No scruple of taste must in grim times like these be allowed to stand in the way of speaking the plain truth.

I have no thought of suggesting that any political party is paramount in matters of patriotism. I feel too keenly the sacrifices which have been made in this war by all our citizens, irrespective of party affiliations, to harbour such an idea. I mean only that the difficulties and delicacies of our present task are of a sort that makes it imperatively necessary that the nation should give its undivided support to the government under a unified leadership, and that a Republican Congress would divide the leadership.

The leaders of the minority in the present Congress have unquestionably been pro-war, but they have been anti-administration. At almost every turn, since we entered the war, they have sought to take the choice of policy and the conduct of the war out of my hands and put it under the control of instrumentalities of their own choosing. This is no time either for divided counsel or for divided leadership. Unity of command is as necessary now in civil action as it is upon the field of battle. If the control of the House and Senate should be taken away from the party now in power, an opposing majority could assume control of legislation and oblige all action to be taken amidst contest and obstruction.

The return of a Republican majority to either House of the Congress would, moreover, certainly be interpreted on the otherside of the water as a repudiation of my leadership. Spokesmen of the Republican party are urging you to elect a Republican Congress in order to back up and support the President, but even if they should in this way impose upon some credulous voters on this side of the water, they would impose on no one on the other side. It is well understood there as well as here that the Republican leaders desire not so much to support the President as to control him. The peoples of the allied countries with whom we are associated against Germany are quite familiar with the significance of elections. They would find it very difficult to believe that the voters of the United States had chosen to support their President by electing to the Congress a majority controlled by those who are not in fact in sympathy with the attitude and action of the Administration.

I need not tell you, my fellow countrymen, that I am asking your support not for my own sake or for the sake of a political party, but for the sake of the nation itself, in order that its inward unity of purpose may be evident to all the world. In ordinary times I would not feel at liberty to make such an appeal to you. In ordinary times divided counsels can be endured without permanent hurt to the country. But these are not ordinary times. If in these critical days it is your wish to sustain me with undivided minds, I beg that you will say so in a way which it will not be possible to misunderstand either here at home or among our associates on the other side of the sea. I submit my difficulties and my hopes to you. 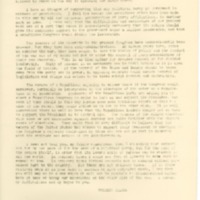