From the Committee on Public Information  Immediate Release.

President Wilson has sent the following letter to Secretary of the Interior Lane:

The question which you have brought to my attention is of the very greatest moment. It would, as you suggest, seriously impair America's prospects of success in this war if the supply of highly trained men were unnecessarily diminished. There will be need for a larger number of persons expert in the various fields of appleied science than ever before. Such persons will be needed both during the war and after its close. I therefore have no hesitation in urging colleges and technical schools to endeavor to maintain their courses as far as possible on the usual basis. There will be many young men from these institutions who will serve in the armed forces of the country. Theose who fall below the age of selective conscription and who do not enlist may feel that by pursuing their courses with earnestness and diligence they also are preparing themselves for valuable service to the nation. I would particularly urge upon the young people who are leaving our high schools that as many of them as can do so avail themselves this year of the opportunities offered by the colleges and technical schools, to the end that the country may not lack an adequate supply of trained men and women.

Cordially and sincerely yours, 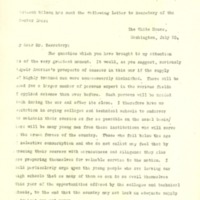