This statement describes to need for and duties of the Food Administration compared to the Department of Agriculture.

Statement by the President:

It is very desirable, in order to prevent misunderstandings or alarms and to assure cooperation in a vital matter, that the country should understand exactly the scope and purpose of the very great powers which I have thought it necessary in the circumstances to ask the Congress to put in my hands with regard to our food supplies. Those powers are very great indeed, but they are no greater than it has proved necessary to lodge in the other Governments which are conducting this momentous war, and their object is stimulation and conservation, not arbitrary restraint or injurious interference with the normal processes of production. They are intended to benefit and assist the farmer and all those who play a legitimate part in the preparation, distribution, and marketing of foodstuffs.

It is proposed to draw a sharp line of distinction between the normal activities of the Government represented in the Department of Agriculture in reference to food production, conservation, and marketing on the one hand and the emergency activities necessitated by the war in reference to the regulation of food distribution and consumption on the other. All measures intended directly to extend the normal activities of the Department of Agriculture in reference to the production, conservation, and the marketing of farm crops will be administered, as in normal times, through that Department, and the powers asked for over distribution and consumption, over exports, imports, prices, purchase and requisition of commodities, storing, and the like which may require regulation during the war will be placed in the hands of a commissioner of food administration appointed by the President and directly responsible to him.

The objects sought to be served by the legislation asked for are: full inquiry into the existing available stocks of foodstuffs and into the costs and practices of the various food producing and distributing trades; the prevention of all unwarranted hoarding of every kind and of the control of foodstuffs by persons who are not in any legitimate sense producers, dealers or traders; the requisitioning when necessary for the public use of food supplies and of the equipment necessary for handling them properly; the licensing of wholesome and legitimate mixtures and milling percentages; and the prohibition of the unnecessary or wasteful use of foods. Authority is asked also to establish prices, - but not in order to limit the profits of the farmers, but only to guarantee to them when necessary a minimum price which will insure them a profit where they are asked to attempt new crops, and to secure the consumer against extortion by breaking up corners and attempts at speculation when they occur by fixing temporarily a reasonable price at which middlemen must sell.

I have asked Mr. Herbert Hoover to undertake this all-important task of food administration. He has expressed his willingness to do so on condition that he is to receive no payment for his services and that the whole of the force under him, exclusive of clerical assistance, shall be employed so far as possible upon the same volunteer basis. He has expressed his confidence that this difficult matter of food administration can be successfully accomplished through the voluntary cooperation and direction of legitimate distributors of sfoodstuffs and with the help of the women of the country.

Although it is absolutely necessary that unquestionable powers shall be placed in my hands in order to insure the success of this administration of the food supplies of the country, I am confident that the exercise of those powers will be necessary only in the few cases where some small and selfish minority proves unwilling to put the nation's interests above personal advantage and that the whole country will heartily support Mr. Hoover's efforts by supplying the necessary volunteer agencies throughout the country for the intelligent control of food consumption and securing the cooperation of the most capable leaders of the very interests most directly affected, that the exercise of the powers deputed to him will rest very successfully upon the good will and cooperation of the people themselves, and that the ordinary economic machinery of the country will be left substantially undisturbed.

The proposed food administration is intended, of course, only to meet a manifest emergency and to continue only while the war lasts. Since it will be composed for the most part of volunteers, there need be no fear of the possibility of a permanent bureaucracy arising out of it. All control of consumption will disappear when the emergency has passed. It is with that object in view that the administration considers it to be of preeminent importance that the existing associations of producers and distributors of foodstuffs should be mobilized and made use of on a volunteer basis. The successful conduct of the projected food administration by such means will be the finest possible demonstration of the willingness, the ability, and the efficiency of democracy, and of its justified reliance upon the freedom of individual initiative. The last thing that any American could contemplate with equanimity would be the introduction of anything resembling Prussian autocracy into the food control in this country.

It is of vital interest and importance to every man who produces food and to every man who takes part in its distribution that these policies thus liberally administered should succeed and succeed altogether. It is only in that way that we can prove it to be absolutely unnecessary to resort to the rigorous and drastic measures which have proved to be necessary in some of the European countries.

(The Secretary of Agriculture has been of the opinion from the outset that special emergency powers for the regulation of distribution and consumption during the war should be vested in the President, and that these powers should not be exercised by the Department of Agriculture but by an emergency agency. He has also entertained the hope that Mr. Herbert C. Hoover, especially because of his familiarity with international food conditions, might be designated by the President to discharge these powers during the war. He is greatly pleased that the President has concluded the matter and very much hopes that the necessary powers will be quickly conferred by the Congress.) 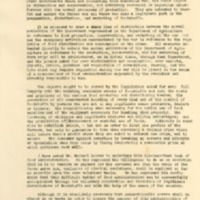