Herbert Hoover writes to Woodrow Wilson about the sugar situation.

The time has arrived when we must make several changes in our methods of handling sugar.

First, we must make some preparation for handling the new sugars as our domestic beet and cane sugar production begin late in August, although the new Cuban sugar does not arrive until December. We have made great endeavours to stimulate our domestic sugar production this year, not only because of the world shortage in sugar but also to relieve import tonnage. Amongst our activities in this direction was the creation of a series of commissions which arranged for a large advance to beet producers over their return for the year before. In order to secure from the factories an adherence to the “commission” price for sugar beets, I undertook that we would adjust the price of sugar so far as the Government was able, next year, to cover the increased cost of beets and a fair profit. Much the same story applies to Louisiana sugar.

We shall probably not secure as large a production of domestic sugar as last year, however, as the shortage of labour (the beets are an intensive crop) will no doubt curtail them somewhat. However, in order to cover assurances it will be necessary to increase the price of domestic sugar somewhere between one and one and one-half cents per pound,- the figure not being accurately determinable until we have completed further investigation as to costs of sugar production this year in which matter the Tariff Commission is extending us great assistance.

On the other hand, the cost of production in Cuba has not increased anything like the proportion of increased cost in the United States, for the fundamental reason that there has been no comparable advance in the cost of labour and supplies in Cuba to that of the United States. It will, however, be necessary to increase the price of Cuban sugar next year to some extent to cover their advanced cost and maintain a stimulated production, but advance in Cuban sugar will probably not amount to more than one-half cent a pound to give ample satisfaction to the Cuban people.

We therefore arrive at a disparity in these situations for which we must find some solution.- If we advance the price of Cuban sugar to a level that will carry out our assurance to the domestic producer this year and stimulate it for next year, we will be paying to the Cubans from one-half to one cent a pound more than is necessary to maintain their production with fair profit. This will mean a toll to the American people of from $20,000,000 to $40,000,000. There is the further complication that the Allies, who buy a considerable part of the Cuban crop, will object oto imposing upon themselves an unnecessary tax of $20,000,000 in favour of Cuba.

This situation could be corrected by an increase in the import duty by one cent a pound and thus convert the above sums directly into the Treasury. This, however, involves legislation with all the contentious issues that will be rqaised. It has another objection in that, with the consummation of the pending Dutch agreements, there is a strong probability of securing some Java sugar but, owing to the long haul, this will have to come in at a price higher than other sugars and almost any price that is reasonable to domestic or Cuban sugars may keep Java sugar out. The only solution that I can see - and I have consulted Dr. Taussig who is in agreement - would be that we should, in order to secure foreign sugars generally in co-operation with the Allies, place ourselves upon the same footing as they by the purchase of foreign sugar for our government jointly with the Allies. We should purchase in Cuba, Peru, Mexico, Java, or anywhere else at prices proper to the occasion and make an average price to our refiners. This next year the operation would show considerable profits. If this were done, we would need to secure from you, say, $5,000,000 capital and to make a corporation to handle the details. The business would not be accompanied with risk for it would be protected with contracts for both purchase and sale. Such an arrangement would save us from many of the great difficulties of our present sugar arrangements with American refiners and would gain in better handling of shipping over present arrangements.

Second: We have lost considerable sugar by submarines; the imports of Philippine sugar have been greatly curtailed by shortage of shipping; the Cuban crop has not come up to expectations; the French and Italians have lost considerable beet sugar by the German drives - all cumulating to shorten our supplies this year beyond expecttations. In consequence we must by various devices gradually reduce sugar consumption from July 1st onward. Degeneration in sugar supplies is one of the marked features of every country and we must expect it to go on through the war. Sugar is the one commodity that voluntary conservation does not seriously reach. I suppose the great sugar eaters are those of the least moral resistance in the community. Therefore we must put into effect some form of sugar rationing and a drastic control of distribution. Otherwise we shall have territorial and industrial injustices all over the country. I propose an honour system of cards. Any execution of this kind becomes at once expensive, for printing alone ofor 20,000,000 households will cost $100,000 a month, to say nothing of supervision. The Appropriations Committee of the House has refused my application for money to cover such an expense. 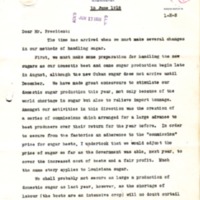