Mr James Hartness of Springfield, Vermont, is obliged to resign from the position as Federal Food Administrator for that state owing to the many demands upon his time and energy called for by the various war activities in which he is taking an active part.

Mr Brooks is strongly endorsed by Mr Hartness, the retiring Administrator. Governor Graham is favorable to his appointment as are many other leading citizens of the state. Until recently Mr Brooks has been President of the E. &. T. Fairbanks Company, but has now sold out his interest and is free to devote his time to this work. His principal activity outside of his own business has been in the educational line. He has been an active member on State Educational Commissions and Boards of Education for many years and is still a member of the State Board of Education. Mr Brooks is a man of great force and vitality as well as excellent judgment and tact and I am confident that he could administer the work in Vermont in a most satisfactory manner. 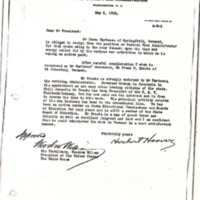