I return herewith suggested draft of reply to Col. Hudson’stelegram of March 20th which you kindly sent to me for preparation. All these gentlemen are hard to please. They base their troubles in raising animals on the price of corn and when corn falls they complain about that commodity. In fact, many commodities are falling as the result of more nearly normal transportation and merchandising conditions and I seem to have mud slinging both ways. I enclose a page from the Congressional Record yesterday and my reply thereto which I would indeed be glad if you would read as it develops an incident of which more complaints will no doubt reach you. It also indicates the heart-breaking injustice of ctriticism based on reckless statements without even the human courtesy of a telephonic inquiry into the truth. 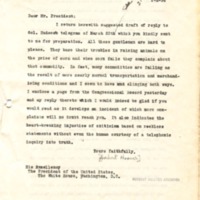