Herbert Hoover informs Woodrow Wilson of the resignation of Gifford Pinchot and E.C. Lasater from the Food Administration due to their disagreement with him over propaganda over meat production.

I have unfortunately had a tea-pot storm in my department. Mr. Houston and I appointed a joint committee to undertake propaganda for the sitimulation of animal production and I selected, amongst others, Mr. E.C. Lasater, a Texas cattle-man, and Mr. Gifford Pinchot for the committee. Mr. Pinchot, whose views are followed by Mr. Lasater, instead of confining himself to stimulation of production in a patriotic way, and devising methods for a better distribution of our yooung cattle and other portions of the programme, took upon himself to advise me with regard to finanacial measures to be undertaken and more especially that we should take over the packing plants in the country and operate them for the Government, and other radical measures. These measures were practically all outside the powers of the Government aside from their visionary character. After some time he resigned and his resignation was followed by that of Mr. OLasater on the ground that we were not conducting the Food Administration for the public welfare. I have declined to answer any of the newspaper propaganda.

.I merely wished to inform you of this as I do not propose to take any action whatever in the matter. 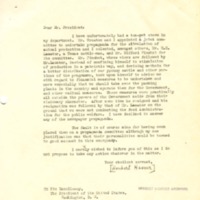