Herbert Hoover encourages Woodrow Wilson to appeal to the humanitarian need for food conservation in his Thanksgiving Proclamation rather than to merely the military need.

With regard to the Thanksgiving Proclamation, I have the idea that it would be of great purpose if the tone of the proclamation could be directed towards the saving of our food and other supplies in provision for gthe many millions of people who are dependent upon us now more than ever before in our history; that, perhaps, it might be placed on a basis of humanity rather than for military necessity.

I have the feeling that in our particular organization, we harp too much on the military and war ends to be gained, and too little upon the humanitarian phases of supporting millions of people who are now isolated from their normal supplies and the burden of which we must have carried whether we had entered the war or not. 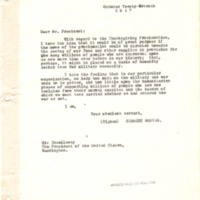