This documents lists the names and qualifications for nominations to the post of Federal Food Administrator for the District of Columbia, Hawaiian Islands, New York State, and New York City.

Lawyer: member of the firm of Wilson, Huidekoper & Lesh, the senior member of which is Mr. Nathaniel Wilson.

(Mr. Wilson has consented to act as Federal Food Administrator for the District, if appointed.)

The active member of the Terriotorial Food Commission.

Recommended by Governor Pinkham and many others.

A leading lawyer of Buffalo and conspicuous for many years as a piublic-spirited citizen.

Recommended by Governor Whitman, Dr. Schurmann of Cornell, John Mitchell (Head of the Food Commission of New York State) and many others.

Vice-President and General Manager of the New York Edison Company.

Mr. Williams is Chairman of the New York Household Enrollment Campaign Committee and has shown remarkable ability as an organizer.

Recommended by Mayor Mitchell and many others.

Passed by Mr. McCormick.(Mr. McCormick has already spoken to the President regarding both Mr. Cooke and Mr. Williams. 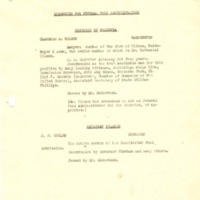