Herbert Hoover sends the names of nominations for Federal Food Administrators for the District of Columbia, Hawaiian Island, New York State, and New York City to Woodrow Wilson, who approves.

I understand that Mr. McCormick has already spoken to you regarding Messrs. Cooke and Williams and that the point was raised that possibly Mr. William was participating in the New York City Mayoralty Campaign. I find that Mr. Williams has never taken an active part in politics and has had no connection whatever with the present Mayoralty Campaign in New York.

Trusting that the above suggestions for Administrators will meet with your approval, I beg to remain 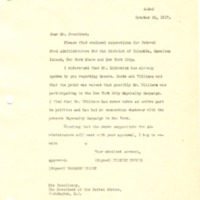