Herbert Hoover says that deferring the Food Campaign will result in loss of expense and endanger the campaign completely.

I had a discussion with the President yesterday about delaying the Food Campaign, and he offered to write me a letter which we can transmit to our some three-hundred thousand volunteers that we have worked on this job.

The deferring of this campaign not only means a great deal of loss of expense, but is likely to break the campaign down unless we can have a strong helpful letter from the President.

As Mr. McAdoo is very anxious to get this matter cleared up at an early moment, I want to ask you to bring it to the President’s attention and ask him if he would be so kind as to sign this letter sometime today and make the alterations in it that he thinks desirable. 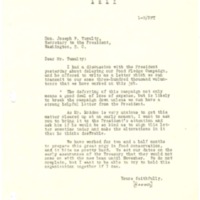